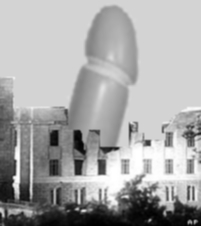 Worried local councillors in Edinburgh are calling on Festival organisers to rethink the inclusion of a controversial art installation as part of the annual event. “Not only are his ‘sculptures’ highly offensive – and certainly not suitable for children – but past installations have shown that they are downright dangerous,” says City Councillor Mark McPharten of the work of sculptor Ronald Spheris, whose latest piece, a giant rubber replica of American satirist and film-maker Michael Moore’s arse, is due to be exhibited outside the gates of Edinburgh Castle as part of the Scottish capital’s Arts Festival. “Let’s not forget the ‘Vagina that Ate Detroit’ back in 2002 – Spheris and his work were rightly banned from the US after that fiasco! They’re still rebuilding parts of the city today! Just think of the damage this arse could do if it came loose from its fastenings and rolled down into the busy streets below the castle! Each cheek weighs over half a ton, for God’s sake!” Others are less worried by the prospect of a pair outsize rubber buttocks bouncing around streets packed with festival goers, than they are at the impact the sculpture – which is hollow and can be toured by the public – could have on the psychological well-being of the city’s youth. “I ask you – would you want your child exposed to Michael Moore’s huge bottom?” demands the Reverend John Stockprick. “Imagine the deep psychological damage which could be caused to small children who are allowed crawl through his rectum? And what of the moral confusion resulting from passing through his anus?” Stockprick and his supporters point to the deep psychological trauma suffered by schoolchildren in the Somerset village of Limpley Stoke when one of Spheris’ previous creations, a gigantic polystyrene replica of pneumatic model Jordan’s breasts being exhibited as part of the annual spring fertility festival, crashed into their school. “Thankfully, only the left one actually hit the school, crushing a mobile classroom before coming to rest in the playground,” says Stockprick. “I shudder to think of the devastation which the pair of them would have caused!” The right, and slightly larger, breast, became separated from its sister as they rolled down the main street, having been cut loose from their foundations by vandals, and ended up impaled on the steeple of St Mary’s church. “Whilst, thankfully, none of those poor children was seriously injured, many of them can no longer look a breast in the face, so to speak,” claims the outraged clergyman. “In one case, two children who had been trapped under the breast for two hours until rescued, ran screaming from their back garden when they saw their mother sunbathing in a bikini! Low cut tops have had to banned from the whole village to prevent further such incidents!”

In an attempt to appease the protesters, festival organisers have announced that installation of Spheris latest work is to be delayed, pending a risk assessment by the local council’s Health and Safety inspectors. “Legitimate safety concerns have been raised as to the location of this sculpture,” explains a spokesperson. “There is no escaping the fact that there have been a number of unfortunate incidents involving this artist’s works over the past few years.” The most notorious of these incidents is undoubtedly last year’s ‘rampage’ by a giant inflatable replica of pop star Robbie Williams’ genitalia, in which two people died and several others were seriously injured. The sculpture – with at least twenty five visitors on board – broke loose from its moorings in a Scunthorpe park and rose sixty feet into the air. Eyewitnesses described how some victims could be seen dangling from the scrotum as the sculpture soared into the air, whilst at least two people were witnessed falling from the penis’ urethra. “They were like tears dropping from a Jap’s Eye,” commented local poet Armstrong Whitworth. “It was as if, having enjoyed the artistic pleasures of Robbie’s giant genitals, they were ejaculated forth to fertilise the imaginations of others.” It is thought that the abnormally high temperatures experienced during an unseasonable Summer heat wave raised the temperature of the air in the sculpture enough to make it behave like a crude hot air balloon. “Its shape, particularly the scrotum with its two huge testicles, was conducive to producing a high degree of lift,” explained a spokesperson for the local Fire Brigade. The situation was made worse when a sudden gust of wind caught the sculpture when it was already in the air, and blew it toward a local housing estate, where it damaged several houses before being punctured by a television aerial. However, its occupants’ ordeal was far from over as the giant genitalia plummeted to earth, directly on top of a children’s playground. “There were terrified children screaming and running for their lives as it went down on the swings and slide,” said local woman Janet Probe. “I’m sure my six year old daughter will be traumatised for life after nearly being smothered to death by an outsize set of male genitals. If she grows up to be a lesbian I’ll be suing the artist!”

Nevertheless, despite these incidents, Spheris’ work continues to attract supporters, most of whom believe that his critics simply fail to grasp the sculptor’s intent. “It is all about modern society’s obsession with celebrity,” explains Henry Ross-Crudden, art critic of the Scottish Daily Crack. “Take this latest installation – isn’t it posing the question: if this were just an ordinary arse, would we be looking at it, physically penetrating it even? The point Spheris is making that we only think it attractive and worthy of our attention because it is a celebrity arse! The fact that the celebrity it belongs to is a grossly overweight middle-aged man merely underlines the irony of the central conceit!” Once inside the twenty foot tall sculpture – which is entered by pushing apart its giant rubber cheeks and crawling down its ‘anus’ – visitors are treated, in the right buttock, to a collection of images of both Gulf Wars, whilst footage of the September 11 attack on the World Trade Centre are projected on the inside of the left buttock. “Again, Spheris is asking: would we be paying attention to this critique of US foreign policy if it wasn’t being presented within a celebrity’s buttocks? Must everything have to be validated by celebrity endorsement before we accept it?” contends Ross-Crudden. “It is just unfortunate that the accidents which seem to befall Spheris’ works diverts attention from this message!” However, others suspect that these ‘incidents’ are no accidents. “Aren’t they just part of the performance?” muses art historian Tristram Cockwell of Berwick Polytechnic. “When Whoopi Goldberg’s enormous papier mache vagina opened its legs and swallowed several busloads of commuters in the Motor City, wasn’t that, in itself, a deeply profound comment on the way in which we allow ourselves to be consumed by our obsession with worthless celebrity culture?” Spheris himself, who hasn’t been seen in person for over twenty years, remains unavailable for comment. However his sometime agent, drinking crony and part-time builder Jim Nadds did offer this observation: “Surely the real performance art here is the reaction he manages to elicit from both narrow-minded philistines and pretentious arty ponces by presenting a load of giant knobs, tits and fannies as art!”