Last of the Smoking Sea Birds 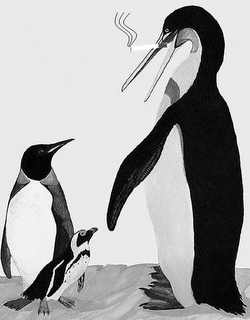 “Look, as these bastards were at least partially responsible for this situation, it’s only right that they should help put it right,” Britannic Petroleum (BP) executive Charles Legover told a press conference in Pascagoula, Alabama, defending his company’s decision to blast the bodies of dead marine animals and sea birds into a ruptured oil pipe in an attempt to stem the massive leak of oil into the Gulf of Mexico. “Whilst we don’t deny that the oil slick currently threatening the Louisiana coastline is, in part, the result of the unfortunate sinking of one of our oil rigs, the reality is that it is largely the fault of local wild life. The very wild life, in fact, which is currently portraying itself as the victim of this disaster.” According to the oil executive, much of the so-called ‘oil spill’ is, in fact, composed of tar and animal spittle. “It is a well established scientific fact that many wild animals are actually heavy smokers. This slick is largely the result of their heavy smokers’ coughs making them bring up large quantities of the tar they’ve inhaled from their cigarettes. Naturally, they spit this noxious substance into the sea,” he maintains. “Believe me, it is no coincidence that the area of the slick is bounded by several wild life reserves.” Amongst the animals blamed by Legover for the pollution are the local manatee population. “We all know that these are the bastards who masquerade as mermaids, loitering provocatively on buoys, puffing on a cigarette as they lure unsuspecting sailors into their beds, before overcharging them for a quick drunken fumble,” he insists. “Of course, they then light up a post-coital cigarette, before coughing their lungs up into the sea. They’re a bloody menace.” Not surprisingly, Legover’s claims have caused outrage amongst naturalists and environmentalists. “This is absolutely ridiculous, even if the local manatee population was smoking, there is absolutely no way that they could create a slick that large, that quickly. There simply aren’t enough of them – they’re an endangered species, for God’s sake,” says Joe Scoffer of the Pensacola Bird Protection League. “Besides, quite apart from the fact that most of these wild life reserves are equipped with spittoons, everybody knows that sea mammals exclusively smoke low tar filter tips, making it highly unlikely that they are the cause of this slick.” Legover concedes that the manatees alone can’t be responsible for the whole slick. “Well obviously, although it’s no bloody surprise that they’re an endangered species – most of them are on at least a hundred a day,” he says. “Obviously, the worst offenders are sea birds, especially the gulls – there are thousands of them over the water every day, every one of them smoking unfiltered roll-ups.”

Legover’s bizarre claims are largely derived from the work of noted palaeontologist Professor John Clamjam, one of a growing number of scientists calling for an outright ban on smoking, claiming that it threatens the ozone layer and is responsible for climate change. Most of Clamjam’s evidence is derived from the fossil record, as he outlined when testifying before a British Parliamentary Select Committee on public health last year. “The fossil record clearly shows that smoking has resulted in mass extinctions in prehistory,” Clamjam told the committee. “It is no exaggeration to say that mankind is now facing the same dire threat.” According to the scientist, recent paleontological discoveries seemed to add weight to his theories. “Take those fossilised giant prehistoric penguins recently discovered in Chile – it was their hundred a day habit which caused disastrous climate change in the area back in the Pleistocene period,” he claimed. “Before they got hooked, it was freezing cold and covered in ice. Within a few millennia, it had turned into a tropical furnace, forcing the surviving, non-smoking penguins to migrate to Antarctica.” Clamjam also pointed out that modern penguins are significantly shorter than their ancestors as a direct result of cigarette smoking. “Everybody knows that the tar contained in those cigarettes stunts growth,” he declared to the committee. “Don’t forget, they didn’t even have low tar filter tips back then – they were taking huge quantities of tar into their lungs, before hawking it all up again in huge coughing fits, thereby creating the prehistoric tar-pits which claimed the lives of so many mastodons.” But the giant penguins weren’t the first tobacco-related mass extinction. “Forget all that nonsense about the dinosaurs being wiped out by an asteroid strike,” Clamjam told the committee. “They choked to death as the result of them poisoning their atmosphere with stale smoke.” Cigarettes were apparently also behind the aggressive behaviour of many of the giant reptiles. “Look at the poor Tyrannosaurus – its arms were too small to reach its mouth, or even hold hold a cigarette,” the professor explained to MPs. “Their bodies craving nicotine and enraged at their inability to smoke themselves, the great beasts naturally went on homicidal rampages, slaughtering other dinosaurs and trying to tear the lit cigarettes from their dead jaws.” Clamjam and his colleagues fear that such behavioural changes are currently being seen in human beings, as witnessed by the disturbing increases in youth gang violence: “Clearly these children, too young to buy the cigarettes they became addicted to in the womb as a result of their mothers’ smoking habits, are going out and trying to snatch the evil weed from established smokers.”

Smoking is already having serious climactic effects, with the hole in the ozone layer above the Arctic directly attributable to the smoking habits of local inhabitants. “Unfortunately, Polar bears, in common with all ursine species, are heavy smokers,” observed Clamjam. “However, the worst offenders are the seals. Indeed, their habit is so bad that the Canadian government has been forced to implement an annual cull to try and cut down the amount of smoke they are putting into the atmosphere.” Nevertheless, despite the sterling efforts of the brave seal clubbers, a huge pall of dirty smoke and cigarette ash still hangs over much of Canada and Alaska. Consequently, Clamjam and other scientists are lobbying for the cull to be extended to include Polar bears. “This may seem drastic, cruel even, but it is essential we take action now, if we are not to go the way of the giant penguins and dinosaurs,” he recently told a climate changr conference. “It’s either them or us – it really is pointless our governments’ implementing measures to reduce smoking amongst the human population, if we continue to ignore the problems caused by animal smoking. Already we’ve seen the long-term effects of excessive smoking by arctic wildlife in the disruption to civil aviation which recently resulted from clouds of their cigarette ash drifting over Europe” Whilst agreeing with Clamjam’s analysis, BP’s Legover stops short of calling for a mass cull of wild life in the Gulf of Mexico. “We’re proposing the institution of a rehabilitation programme for these creatures, to try and wean them off of the demon weed,” he says. “We envisage the capture and tagging with nicotine patches of every bird and animal in the area. Obviously, as most of the animals causing the pollution are living in Federal nature reserves, we believe that Washington should foot the lion’s share of the bill for any such operation. The US government has yet to respond to these latest proposals.