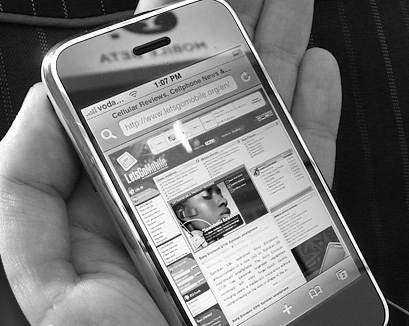 “Believe me, this represents a quantum leap forward in protecting our children from roving child molesters,” declares Jim Tratt, as he unveils his new ‘Stranger Danger’ iPhone application. “Once you have this installed on your phone, you and your kids need never worry about ‘stranger danger’ again.” According to the twenty eight year old IT developer, all that users of his app have to do if they encounter anyone they suspect of being a paedophile, all they have to do is surreptitiously take the suspect’s photo with their phone, and activate the utility. “The photo is automatically compared to an online database of photos of suspected paedophiles,” he explains. “If it doesn’t find a match, the app then analyses the suspect’s main facial features, and compare them against a set of attributes known to denote a tendency toward paedophilia. You know the sort of thing: eyebrows meet in the middle, eyes too small, hooked nose or low slung ears. It’s been scientifically proven that possession of a combination of at least three of the attributes our database has listed denotes a seventy per cent probability that the subject is a nonce.” If the app can make a match against the database then a ‘paedo alert’ siren is emitted by the phone – which also flashes – and the alleged paedo’s photo is flashed across all forms of social media in order to alert parents to the potential danger they pose. “Once we’ve got these bastards branded as kiddie fiddlers, then any threat they might pose to our children will be neutralised,” Tratt proudly declares.

However, the app has been widely criticised by civil liberties groups, who fear that its use could result in a spate of false allegations due to the inadequacies of the database employed by the app. “We have no idea where this database has come from. Who compiled it? Has it been vetted by the police and Home Office, or checked against the UK’s register of sex offenders?” asks top human rights lawyer Hubert Ponser. “I’d also like to see the actual scientific research behind these facial attributes which supposedly denote a tendency toward paedophilia.” Tratt has been quick to respond to such criticisms, claiming that his database is derived from highly reputable sources, including neighbourhood watches, citizen’s action groups and tabloid newspapers. “These are the people on the ground, who know who the real wqeirdos are in their local communities,” he says. “As for the scientific research, it has been widely published on a number of highly reputable web sites, including Facebook and the Daily Mail message boards.”

The government has also expressed concerns about the concept of the ‘Paedo Alert’ triggered by the app, with a Minister pointing out the shortfalls of such alert systems. “It’s all too easy to make a mistake with one of these alerts and inadvertently trigger a mass panic,” says Hugh Mastiff, Minister for Child Protection. “Just look at that business last year when a disclosure under ‘Sarah’s Law’ of the whereabouts of released paedophiles in Somerset was confused with a terror alert. Obviously, in retrospect we realise that further checks should have been made before a county-wide warning that children in Somerset could be at increased risk of being felt up, molested or even buggered by gangs of suicide paedos of Middle Eastern origin was issued. It was quite a debacle. Not only did we have to apologise for the undue stress caused to parent, but we were also forced to pay out compensation to the dozen or so Asian shop owners attacked by lynch mobs on suspicion of being nonces not to mention the Indian restaurant fire bombed by vigilantes in Minehead.”

A previous false alarm had occurred only a few months earlier, when the government had raised the UK’s terror alert level to ‘severe’, after someone at the Home Office confused a Met Office severe weather warning with intelligence of an imminent terror attack. “To be fair, though, thatt’s an easy mistake to make – the two are very similar, both full of exaggerated threats, dire, but completely unsubstantiated, warnings and lots of wild speculation,” Mastiff points out. “That said, It’s not as if there isn’t any link between the weather and terrorism. I mean, just look at the way that snow completely disrupted Britain. Al Qaeda couldn’t have done better if they’d detonated a dirty bomb!” Although the incident didn’t create quite the same level of panic as the Somerset ‘Paedo Alert’, the alert resulted in several snowmen being reported to the police as suspected terrorists, although all were eventually released without charge. Consequently, the government remains dubious as to the value of Tratt’s new app, fearing that it will simply encourage vigilantes to take the law into their own hands. Not surprisingly, Tratt is dismissive of such fears. “My app is simply enabling this ‘Big Society’ the government is always banging on about,” he says. “I’m just providing the information that law-abiding citizens need in order to police their own communities.”

The ‘Stranger Danger’ app isn’t the first smart phone application that Tratt has developed. At the height of the furore over MP’s expenses and their relationships with lobbyists, he launched an app that he claimed would allow the user to immediately locate the nearest corrupt MP. “Obviously, it was only functional in Westminster, within a five mile radius of Parliament, to be precise,” Tratt explains. “And I’d like to refute the allegation that it helped lobbyists hook up with corrupt MPs. It simply tried to match up their clients with MPs who had similar interests, and who, based on their expenses claims, seemed to be living beyond their means.” Tratt followed this up with another app which would allow punters to locate the nearest brothel, massage parlour or spanking cinema. “Whilst it was originally only functional within Soho, we were planning to roll it out to cover other red light districts across Britain,” he says. “Eventually, we were hoping to expand the database to include individual prostitutes – you’d key in your preferences, big knockers, red hair, or whatever, and it could find you the nearest match within a two mile radius.” As with the ‘Stranger Danger’ software, Tratt claims that this earlier app provided a valuable public service. “If every punter in the country had that app, we could eliminate kerb-crawling forever,” he claims. “In fact, one of our plans was to offer a service whereby a punter could take a picture of any woman he saw on the street who took his fancy, and check her against the database to see if she was on the game – and if so, what she’d do and how much she’s charge. Just imagine the embarrassing situations that could have eliminated!”

Sadly for Tratt, both apps had to be withdrawn following legal threats, a fate he hopes that his latest venture will avoid. “It’s a vital tool in the war against the paedos. Don’t think that they aren’t perverting new technology to their own filthy ends – it’s an electronic arms race out there,” he says. “Trust me, I have it on excellent authority that, even now, the bastards are developing their own app which allows them to instantly locate the nearest paedophile ring in any new area they move into. Not only that, but it will give them instant access to a database of all the local kids, complete with names, addresses, ages and favourite sweets! We have to keep up with the nonces, or we might as well just stick our kids out on street corners with signs round their necks saying ‘rape me now’!”