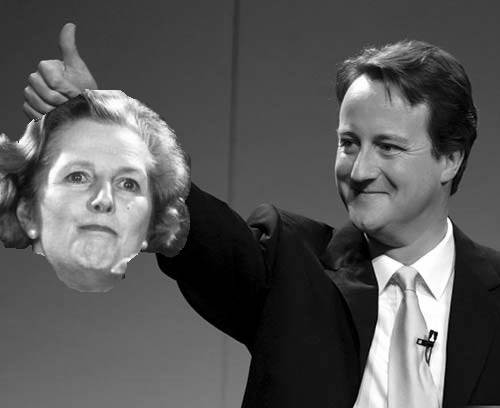 Prime Minister David Cameron shocked the world when, during his predecessor Maggie Thatcher’s state funeral, he pulled the deceased former Tory Party leader’s severed head from a bag and brandished it at Labour politicians sitting in the congregation at St Paul’s cathedral. “I just couldn’t believe what I was seeing – there he was in the pulpit, about to give what we assumed would be a eulogy, when he suddenly produced this sack,” says former soft core porn movie producer Jack Hornington, one of many guests from the glittering world of British show business invited to the funeral. “Next thing we knew, he’d pulled this head out of it! At first we thought it was a fake, then we realised it was real and it was Maggie! He was holding it by the hair, thrusting it toward Ed Miliband and Ed Balls, his face twisted into this maniacal grimace! What amazed us all was the fact that the Labour leadership just stood there, transfixed, as if they’d been turned to stone!” Not surprisingly, panic ensued, with mourners stampeding towards the doors. As they poured out onto the steps of the cathedral, a cackling Cameron fled through the vestry, taking his hideous trophy with him.

“At first we thought he was part of the protest – someone in a David Cameron mask waving a papier mache replica of Thatcher’s head – then we realised it was the real thing,” recalls Jim Thung, who was part of the anti-Thatcher protest going on in Trafalgar Square. “It was horrible – he was running around like a lunatic, shouting ‘Ding, dong, who is dead now, bastards?’ and thrusting this embalmed head at people. Children were screaming in terror and adults vomiting! He’d clearly taken leave of his senses!” Having disrupted the protests, Cameron escaped to the safety of Ten Downing Street, still clutching his mentor’s head. According to unconfirmed reports, the Prime Minister, after barricading himself into the Cabinet room, phoned the BBC’s Director General, demanding a live TV broadcast from Downing Street be set up immediately. “The way I heard it, he wanted to wave the head at the whole nation on live television,” says Thung. “However, they managed to break down the doors of the Cabinet room and shoot him with tranquiliser darts before the broadcast could be set up!”

Whilst the government have tried to play down the incident, denying point blank that any severed heads were waved around and blaming such reports on mass hysteria and disinformation spread by the extreme left, trade unions and homosexuals, there has been much media speculation as to what triggered Cameron’s bizarre behaviour. “It’s clear that he was driven temporarily insane by his grief over the death of his idol, Baroness Thatcher,” opined top celebrity psychoanalyst Dr Roy Perch, in his regular column in tabloid The Shite. “It is quite obvious to me that he can’t be held responsible for decapitating Thatcher’s corpse – he was in a delusional state in which he imagined that, like the mythical gorgon, the severed head was endowed with magical power to turn Thatcher’s enemies into stone!” Perch’s theory seems to be backed up by the testimonies of various witnesses to the funeral atrocities. “It certainly seemed that Cameron was expecting something to happen when he thrust the head at people,” says Thung. “He seemed genuinely bemused that nothing was happening to the people who saw Maggie’s head – other than throwing up or screaming, that is. Perhaps he was hoping to turn what he perceived as the enemies of Thatcherism to stone. Maybe that’s what the attempted TV broadcast was – he thought the only people watching at that time of day would be what he considered work-shy layabouts and benefit cheats.”

However, other commentators believe this explanation to be overly simplistic. “In truth, I think he saw the head as a fetish against the reality of the world,” pondered Professor Bob Mincer in The Journal of the West Slough Correspondence School of Psychoanalysis. “By thrusting it at his supposed enemies, rather than expecting them to turn to stone, Cameron was hoping to use the potent force that was Maggie Thatcher to keep at bay what they represented. He is clearly in deep denial at the manifest failure of his government’s economic policies and believes the head can symbolically protect him from this truth, through the right-wing fantasy of success it represents.” Mincer also suspects a psycho-sexual could be at work. “I believe it significant that, in Freudian terms, decapitation represents symbolic castration,” he wrote in his article. “His misappropriation of Thatcher’s head could, therefore, indicate that Cameron feels emasculated by the success of his predecessor.”

Regardless of Cameron’s motivations, opinion is still divided as to whether or not his treatment of Thatcher’s severed head was disrespectful to her memory. “I know there are many who will disagree with me, but I actually think he was doing it as a mark of respect,” opines funeral guest Jack Hornington. “I mean, he was actually acknowledging her power and achievement, by saying that, even in death, she remains a potent weapon against the lefties, scroungers, foreigners and gays. If that isn’t a celebration of the Iron Lady, I don’t know what is!” Incredibly, much of the right-wing press appear to agree with the pornographer. “Obviously, if some filthy leftie protestor had defiled her body and waved her head around like that, it would have been an outrage and completely disrespectful,” explains Daily Excess Deputy Editor Norbert Clenchingthorpe. “But we’re talking about ‘one of us’ who acted out of genuine love and respect for our great leader. When he held that head up high, for the world to see, the Prime Minister was making a statement: that the spirit of Thatcherism, which made this country great, is still alive and all those foreign wallahs trying to pull us down should look out!”

Labour MP Ron Smidgehurst has another perspective on the furore surrounding the Thatcher funeral. “They just can’t accept that she’s finally gone,” he told readers of his regular column in the Daily Norks. “They are in denial to the extent that they are even prepared to use her disembodied head to create a ‘Cult of Thatcher’! Believe me, before you know it, her head, floating in a glass jar, will be installed in the Commons presiding over our democracy as a literal ‘Head of State’! We’ll be forced to give it offerings and sacrifices in order to get legislation passed! Anyone who displease her will doubtless be struck down by one stony glare from the head!” Downing Street has dismissed Smidgehurst’s claims as ‘demented ranting’ and once again pointed out that David Cameron did not, at any point during or after the funereal, brandish Mrs Thatcher’s severed head.