All Greek To Me 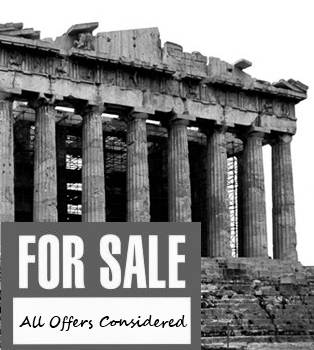 “I came downstairs this morning to find this guy standing in the middle of the kitchen – he had my car keys in his hand. I could hardly believe it when he told me he was from the EU and had come to repossess my car in lieu of part of Greece’s debt!” a still astonished Giorgiadis Papandros, recently told the International Advertiser and Car Mart. “As he left, he turned and told me that he’d also taken fifty Euros from my wife’s purse. He added: ‘We’ll be back for her later’. I couldn’t believe what had happened!” The thirty eight year old Athens resident’s experiences are, incredibly, not an isolated case, as the full repercussions of the Greek government’s deal to secure a multi-billion Euro bail out from the EU begin to be felt by Greece’s citizens. “My next door neighbour told me that the same bastards had been in his house and taken all his furniture, the next day they were back, saying the stuff they’d taken didn’t cover his share of the debt, so they took all his bathroom and kitchen fittings – toilet, bath, sinks, taps, the lot – too!” Papandros claimed. “Obviously, we couldn’t believe that this was legal, but when I checked it turned out that part of the deal with the EU was to make every Greek citizen personally liable for the nation’s debt!”

Experts believe this latest move represents an attempt by the embattled Greek government to prevent any further repossessions of national assets by creditors in lieu of debt repayments. “It was bad enough having two of the islands most popular with tourists annexed by a hedge fund, but the final straw was when those German repo men turned up in Athens and started trying to dismantle the Parthenon and transport it to Berlin,” says top economist Christatos Bifocalglasis, a former financial advisor to the government. “By passing on the burden of debt directly to the people, the government is clearly trying to avert any further such incidents, They probably also thought that there was no way foreign creditors would actually try and enforce the debt by taking people’s personal belongings.” For many ordinary Greek citizens, who have already suffered wage cuts, job losses and massive cuts in public services as their government tries to cut its deficit, this latest development is the final straw. “It’s clear that they’re trying to steal our country, lock stock and barrel,” declares Papandros, who is currently facing the loss of his own job as a teacher amidst the latest round of spending cuts. “The bastards have even taken away our democracy – our elected government has been replaced by unelected technocrats and now they want to impose ‘monitors’ on us to see that we dismantle our economy correctly!” Papandros is no doubt as to who ‘they’ are. “It’s the bloody Germans behind this – we kicked them out in 1945, but now they’re back to finish the job of stealing our country,” he rages. “Believe me, those ‘monitors’ – they’re bailiffs really. German bailiffs – just like the one who came to my house. He had a bloody German accent, not to mention a shaven head and Nazi-themed tattoos!”

Papandros also fears that it won’t just be his countrymen’s physical assets which are threatened by the new debt agreement. “At first I thought that German bastard’s reference to coming back for my wife was just an idle threat, but I’ve since heard rumours about wives and even children of debtors being bundled into the backs of unmarked vans and spirited away,” he claims. “Apparently, the children are sent off to German-owned factories in Eastern Europe, to work as virtual slave Labour, whilst the women are forced into prostitution on the streets of Hamburg!” Not surprisingly, Papandros’ opinions have been dismissed by the authorities as hysterical anti-German propaganda. “It’s ridiculous to claim some German-inspired conspiracy against Greece, not to mention highly offensive to a long-standing and democratic ally to link this fantasy conspiracy to the Nazi occupation of World War Two,” a government spokesperson told the International Advertiser and Car Mart. “These measures are a result of a collective decision on the part of the EU and its members, not an individual country. In no way are we being ‘taken over’ by banks and accountants like somme bankrupt corporation. True, we won’t actually own anything anymore – but just think how liberating it will be to be relieved of all the burdens of ownership. It is also ludicrous to say that the Greek parliament has lost its sovereignty – we still have full control over the menu in the canteen of the parliament building. As long as it is German sausage, of course.”

Nevertheless, some economic commentators suspect that the German conspiracy theory might not be so far-fetched. “There has been much talk amongst German economists which likens Greece to the ancient city of Carthage,” says Bifocalglasis. “Which is somewhat worrying, as Carthage was considered such a threat to the economy of Rome that it was eventually completely destroyed by the Roman republic, the city sacked and razed to the ground, whilst its surviving citizens were sold into slavery!” The economist fears that the EU – significantly established by the Treaty of Rome – might now see Greece as such a threat to the stability of the Eurozone that it has come to believe that the only long-term solution is to effectively destroy the country as a functioning sovereign state. “With all of its public services and major assets sold off, and no effective control over its economy, Greece will, in effect, cease to exist,” he says. “It’s clear that the rest of the Eurozone countries, particularly Germany, believe that Greece cannot be trusted to make any decisions on its own – democracy in Athens is bad for business in Berlin and Paris!”

For his part, Papandros believes that it might it is too late to save Greece. “It’s clear that the puppet government has no interest in the will of the Greek people, whether it is expressed through the ballot box or on the streets,” he laments. “We’ll all be speaking German before the year is out, believe me!” He also believes that the suppression of democracy and national asset-stripping won’t end with his own country, and has a strong warning for the UK. “You could be next – the Germans have unfinished business with you too,” he opines. “Don’t think it couldn’t happen to you – already your young unemployed are being forced into slave labour schemes with multinational corporations! Your government is already selling your railways, utilities, schools and hospitals to private foreign firms, And don’t forget Cameron’s call for people to start paying off their credit cards to help the economy – check your card statements, you’ll find that the bastards have been adding part of the national debt to every account in an attempt to deceive you into paying it off! Trust me, they’ll do everything they can to transfer the burden of debt from the bankers who caused it to ordinary citizens! Rise up and throw out your puppet government now, before it is too late!”