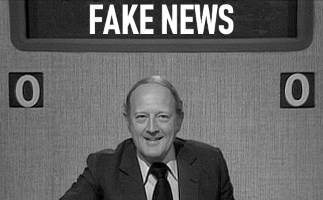 Was a genteel and pseudo-intellectual British TV game show actually part of an establishment conspiracy to subvert the English language, thereby dictating the way we think about certain issues? This is the astounding claim being made by top conspiracy theorist Liam Dongell in his latest article for Practical Conspiracies Digest, in which he contends that the long-running and once popular BBC2 quiz show Call My Bluff was actually an instrument of government oppression. “It first occurred to me when I saw one of the few surviving black and white episodes from the sixties,” he explained. “Frank Muir’s team was offering definitions of the word ‘feminist’, with Frank offering its correct definition as being one who champions women’s rights, while teammate Oswald Moseley claimed that it meant ‘an evil harlot renowned for her prowess in castration’. The opposing team, led by guest captain Enoch Powell, incredibly chose this latter definition as the true one. Obviously, I was expecting Moseley to reveal his ‘bluff’ card, but instead it was revealed to be ‘true!” According to Dongell, this represented an attempt to subjugate the nascent Women’s Liberation movement by attempting to define it, via popular culture, as an oppressive anti-male force that transformed women from their ‘naturally’ submissive state into dangerous monsters Hell-bent on destroying their husband’s manhood.

“What was most disturbing was the fact that nobody questioned the fact that a definition which was effectively the opposite of the correct one, was presented as being true,” says Dongell. “The chairman, Joe Melia, just carried on as if nothing had happened!” Thinking that this incident had been an isolated aberration, Dongell decided to re watch more episodes of the series to reassure himself of this fact. “To be honest, I had never realised that there were black and white episodes made in the sixties before seeing the one in question – I only remember watching the colour episodes in the seventies,” he muses. “Consequently, I had assumed that it had always been presented by Robert Robinson and that Frank Muir, Patrick Campbell and, later, Arthur Marshall had been the only permanent team captains.” Watching the colour episodes from the seventies, however, proved a shock to the conspiracy theorist, convincing him that the format of the teams alternately offering three different definitions of a word, with the other team trying to guess which one was true was surely designed to call into question the actual meaning of specific words – that no matter how convincing a definition might sound, the ‘real’ definition might be the complete opposite.

“I was flabbergasted to find that, in 1970, there were episodes where words like ‘Labour Party’ were featured, with the revelation that the true definition wasn’t ‘Left of centre social democratic party’, but rather ‘Bunch of dangerous communist revolutionaries Hell-bent on destroying the UK economy’,” says Dongell. “Similarly, ‘Harold Wilson’ wasn’t ‘Leader of the Labour Party and Prime Minister’ but instead ‘Spawn of the Devil’, while ‘Ted Heath’ wasn’t ‘Organ playing leader of the opposition’, but ‘Saviour of the British People’. How else can we explain the Tories’ unexpected General Election victory in 1970?” He argues that a subtle campaign of political ‘re-education’ in the guise of an amusing quiz show was clearly being waged by the BBC during the seventies . “It makes you wonder what other words and pieces of political terminology Call My Bluff subverted during its long sojourn on BBC2. Was it the key to Mrs Thatcher’s success by undermining the whole concept of public ownership?” asks Dongell. “Was ‘Nationalisation’ redefined as ‘Economic drain’ while ‘Privatisation’, had its correct definition of ‘Theft of Public Assets’ declared ‘Bluff’, with a false definition of ‘Economic Freedom and Prosperity for All’ instead declared ‘True’? “

For its part, the BBC have denied that any such conspiracy ever took place, dismissing Dongell’s article as ‘utter nonsense’. “We can quite categorically say that we can find no trace of any of the episodes Mr Dongell cites as evidence,” a BBC press release asserted. “Not were neither Oswald Moseley nor Enoch Powell ever participants in the programme, but the sorts of words he claims were being incorrectly defined were in common usage at the times of the original broadcasts – Call My Bluff always focused on obscure words, preferably those which sound like they might be euphemisms for something rude, which were unlikely to be recognised by anyone.” The press release also emphasised that all of the ‘true’ definitions used had been checked against the Oxford English Dictionary. (OED) Such denials, naturally, cut little ice with Dongell. “Obviously they are trying to deny their part in this conspiracy,” he opines. “They thought that they’d wiped all of the offending episodes – but bootleg copies have turned up online. As for the OED – well, that’s obviously another establishment conspiracy – many of its definitions are highly suspect, frequently tending toward the conservative.”

Dongell claims that this sort of subversion via popular entertainment isn’t just historical. “It still goes on, often quite blatantly,” he says. “Just look at the way Rachel Riley uses her role on Countdown to pursue her anti-Labour Party agenda – is it any coincidence that the letters she picks spell out things like ‘anti-Semite’? Not to mention the role played by the same show’s ‘Dictionary Corner’, where not only dubious definitions are given, but all the suggestions for longer words the contestants could have made from the letters seem to be along the lines of ‘Corbyn Shite’, ‘Thatcher Glory’ or ‘Austerity Works’.” Dongell is now demanding a full investigation of whether Call My Bluff was penetrated by Britain’s security services to promulgate a pre-internet version of ‘Fake News’, and to establish exactly who was pulling the strings to ensure that the English language was being subverted for political purposes. Were the producers government ‘moles’, or were the presenters part of a right-wing conspiracy? “I think we need to know whether Robert Robinson was actually an MI5 deep cover agent, acting to undermine the British political left,” he fumes. “We need to call the security services’ bluff over this issue.”