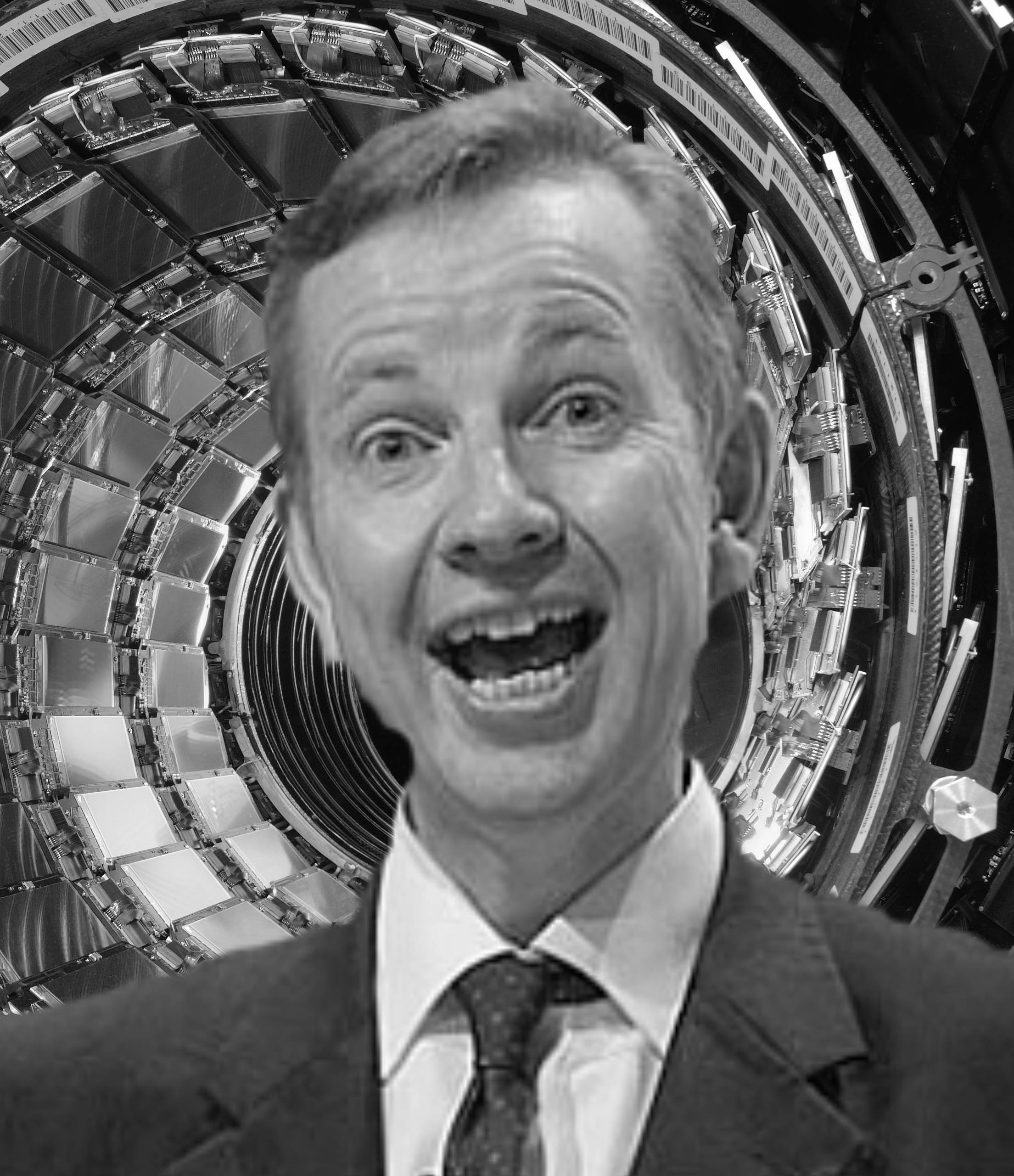 A top scientist has warned that the Conservative Party’s latest deficit reduction policies could threaten the very fabric of existence and result in the destruction of the earth as we know it. “It’s the most irresponsible abuse of science in the pursuit of votes I’ve ever come across,” Dr Sid Firkin, a leading physicist at the Purley Institute of Plumbing told The Daily Norks. “Attempting to pull the earth into an alternate dimension where the deficit doesn’t exist in time for polling day is incredibly risky – the slightest miscalculation and we could find ourselves invaded by hideous inter-dimensional beings or, worse, cast into a dimension where we don’t exist at all!” The scheme, thought to be the brainchild not of Chancellor George Osborne, but rather bonkers Chief Whip Michael Gove, will apparently use the Large Hadron Collider at the CERN laboratory in Switzerland to try and open a portal to the non-deficit dimension. “It’s hardly surprising that the idea came from Gove: Osborne just doesn’t have either the intellectual horsepower or economic expertise to come up with such a daring scheme,” the tabloid reported a Conservative Central Office insider as having told them. “The idea apparently came to him when he heard about the CERN scientists’ planned experiments to use the collider to explore hitherto hidden dimensions of space and time. Being something of an egghead himself, Mr Gove was aware that, according to quantum theory, an infinite number of universes, representing every possible outcome, could exist parallel to ours. He naturally reasoned that these new dimension might be where they could be located. After that, it was just a matter of finding the right one.”

The Tories’ political opponents have joined with Dr Firkin in condemning this latest initiative, with some expressing fears that it could unduly influence the outcome of the forthcoming general election – but not in the way envisaged by Michael Gove. “I watched a lot of old science fiction films and read a lot of old pulp magazines in preparation for my last ministerial post,” former Labour science minister Art Finkelham told the Daily Norks. “Consequently, I’m aware that these other dimensions are simply teeming with hostile life forms just itching to get their slimy tentacles and mandibles on our planet. Trust me, if they run this insane experiment then, next thing we know, we’ll all be enveloped in some other worldly mist and fighting for our very existence against hordes of eldritch terrors from beyond normal space-time!” Such an outcome could have only one electoral beneficiary, Finkelham believes. “I shudder to think what effect it might have on the election campaign,” he told the tabloid. “I mean, if UKIP are getting upset about immigrants from Eastern Europe and Asia coming to the UK, who knows how they’ll react to people being chased down the street and sexually molested by perverts with eight penises from the tenth dimension. This sort of thing can only play into their hands. After all, it would be very hard to argue against their hard line on immigration and the need to ‘look after our own’ if people are being bum-raped in their own homes by extra-dimensional multi-headed sex offenders who can teleport themselves through locked doors and solid walls.”

Indeed, as Finkelham pointed out to the newspaper, UKIP had already condemned the government’s ‘open skies’ policy with regard to extra-terrestrial visitors, claiming that thanks to government inaction alien criminals had been allowed to subject hundreds of Britons to abductions and probings. “We just thought it was a sign of their desperation – and more evidence that they are a bunch of crackpots,” he observed. “But now it seems that they’d gotten wind of this latest Tory scheme and were busy preparing the groundwork for their campaign against the extra-dimensional threat.” Even if hordes of extra-dimensional beings don’t invade the earth as the result of the Tory experiment, Finkelham agrees with Dr Firkin that it could still have catastrophic consequences. “The slightest miscalculation could see us pulled into a dimension where the Nazis won the war, or civilisation has been destroyed by nuclear war,” he told the Daily Norks. “Not only that, but by colliding alternate realities like this, they’re risking absolute chaos, with the fabric of space and time collapsing, cause and effect out of synch and all events and realities occurring simultaneously!  Imagine that: Thatcher, Cameron and Blair all Prime Minister at once!”

Not surprisingly, such fears have been dismissed by the architects of the Tory scheme, who claim that they are nothing more than left-wing scare-mongering. “The operation is perfectly safe, presenting no risks whatsoever – except to the electoral fortunes of our opponents, obviously,” bonkers Tory Chief Whip Michael Gove told the Daily Excess. “We’re timing the dimensional shift for as close to polling day as possible. Ideally, we’d like people to be waking up on the day of the general election to find that they are now living in a Britain where there is no deficit and where all those spending cuts we made have never happened: all of their public services will miraculously have been restored! If that doesn’t ensure us a clear majority then I don’t know what will!” Mr Gove also claimed that his plan was far less risky than Labour’s equivalent deficit reduction proposal. “Using the Large Hadron Collider to create a mini black hole into which the entire deficit can be siphoned, as Ed Balls has suggested, is sheer insanity,” he declared to the newspaper. “Everyone knows that artificially created black holes are inherently unstable and could end up swallowing half of Europe – which equally would only benefit the Euro-sceptics of UKIP!”

The scientific community, meanwhile, have dismissed the whole idea of being able to access a ‘deficit-free dimension’ as utter nonsense. “To say the science behind these claims is suspect would be an understatement,” leading physicist Professor Ted Knobble of the National Physic Laboratory told the Sunday Bystander. “The whole scheme demonstrates a fundamental misunderstanding of both quantum theory and the concept of extra-dimensional space.” The scientist also called into question the mechanism by which Gove hoped to achieve his quantum sleight-of-hand. “As far as I’m aware, the CERN laboratory doesn’t conduct highly expensive, not to mention unscientific, experiments at the request of fantasist politicians not even when, as Dr Firkin has claimed in his tabloid interview, they’ve been ‘bunged a backhander of five hundred quid’.” Nevertheless, in spite of having had his scientific credentials called into question by Professor Knobble, Firkin is adamant that the experiment represents a real and present danger and must be stopped, urging Daily Norks readers to form a mob and, armed with blazing torches, storm CERN. “It is imperative that someone stops those crazy mad scientists at CERN before they unleash all manner of horrors upon on us,” he told them. “Not least the prospect of a UKIP election victory.