The Two Faces of David Cameron 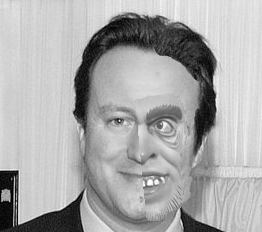 Is Tory leader David Cameron leading a double life? Does Britain’s suave opposition leader, famed for his compassionate and caring approach to conservatism, have an evil alter ego that has been involved in extreme right wing politics, sexual harassment and destabilising the economy through reckless City trading? In a series of astonishing articles, one of the country’s leading political correspondents has claimed that the Conservative leader regularly transforms into Edward Mackintosh, a notorious far right activist, slum landlord and sweat shop owner. “I don’t know if he takes some potion to effect the change, whether it happens every full moon, or whether it’s involuntary, but there’s no doubt that Cameron and Mackintosh are the same person,” declares Hugh Nebbit, political correspondent of the Sunday Excess, who was recently arrested and sectioned under the Mental Health Act after attacking the Tory leader in the street. “To the public Cameron may be some public school smoothy, showing his caring side, advocating law and order and saving the environment, preaching about the need for financial regulation and recapitalising the poor, but when he’s Edward Mackintosh he’s an unreconstructed rapacious capitalist, exploiting cheap labour and consorting with prostitutes and low-lifes!” According to Hugh Nebbit, he first suspected the existence of Cameron’s dark half when attending a social function in the City, at which the politician was also present. “I was talking to the Chief Executive of Barclays Bank, when I heard my wife scream. I turned around to see her pinned against the buffet table having her breasts groped by the most repulsive individual I’d ever laid eyes on,” he says. “He was truly hideous; overweight, bestial and ugly. Naturally, I shouted at the brute to release her breasts from his clammy grasp! The bastard responded by punching me in the face and running from the function room!” Nebbit pursued the horrendous figure into the men’s toilets. “There was no sign of him when I entered, but I could hear this anguished moaning coming from one of the cubicles,” he explains. “I thought the evil scumbag was whacking off, having been aroused by his fondling of my wife’s mammaries, so I started banging on the door, demanding he come out and face me.” However, when the door suddenly swung open, the journalist was shocked by what confronted him. “There in the cubicle was David Cameron! He was just standing there, straightening his tie!” he claims. “I didn’t know what to say, he just smiled and walked out past me!” Assuming he’d been mistaken, Nebbit returned to the function. “It was then that it occurred to me – all the time that the repulsive creature had been in the room, Cameron had been nowhere to be seen! Now the beast had vanished, Cameron was back,” he muses. “But I instantly dismissed the notion as ridiculous – I mean, they were physically different. Surely there was no way they could be the same person, could they?”

However, the more Nebbit thought about, the more it made sense – Cameron and the breast-squeezing fiend were the same person. “It started to fall into place when I made enquiries about the fiend and found he apparition was a notorious City trader by the name of Edward Mackintosh. It was said that just prior to the banking crash, he’d been trading like a madman – selling bank shares by the thousand,” he explains. “Some believed he’d single-handedly undermined the whole British banking sector and sparked the whole economic downturn! Suddenly it made sense – who else could possibly hope to benefit from the destruction of the economy other than the leader of the opposition? Obviously, Cameron was using his Mackintosh persona to try and bring down the government!” Nebbit was soon to cross paths with Mackintosh once more, this time whilst covering a political demonstration against asylum seekers. “I couldn’t believe my eyes when I saw the fast bastard addressing a crowd of skinheads outside a centre for asylum seekers outside Colchester – he was spewing racist invective and inciting them to burn the place down,” the journalist recalls. “Not surprisingly, the tattooed Nazi morons rioted and started throwing petrol bombs at the centre!” In the ensuing chaos, Nebbit spotted Mackintosh making his getaway. “I followed him around the corner and was sure it was his fat arse I saw disappearing into a black cab,” says Nebbit. “I managed to catch up with it before it could pull away, and pulled open the rear door with the intention of confronting the monster.” Once again, the reporter was to be shocked by what he found. “There he was again – bloody David Cameron,” he exclaims. “He was just sat there, bold as brass, staring at me with this smug look on his face! This time I accused him to his face. ‘You are a racist, share speculating sex offender’, I told him. He just laughed at me and told the cabby to drive off!” Further research on the reporter’s part revealed that, despite his violent anti-immigration stance, Mackintosh was rumoured to own a string of factories employing illegal immigrants – paid less than the minimum wage – to produce cheap goods. “It all fitted – good old-fashioned Tory hypocrisy,” says Nebbit. “There was now no doubt in my mind that Mackintosh somehow represented Cameron’s ‘true’ unreconstructed capitalistic inner self!”

Nebbit’s final encounter with Mackintosh was to prove highly traumatic. “I couldn’t believe my eyes when I walked into my bedroom to find this repulsive beast shagging my wife. I don’t what shocked me more, being cuckolded, or her lack of taste!” he says. “He was wheezing with the effort as he bonked her, the fat in his buttocks and beer belly wobbling and rippling. It was disgusting!” Nebbit was horrified by the intruder’s reaction to being caught in the act. “He didn’t miss a beat – he just gave this huge groan as he came, farted loudly, then calmly got out of bed, put his trousers on and strolled out of the bedroom,” he explained. “Of course, I pursued him out of the house and to the street, but again, there was no sign of the fat git. Next thing I knew, that bloody David Cameron came round the corner on his bike. I just saw red and decked the bastard!” Not surprisingly, Nebbit found himself wrestled to the ground and arrested by the Tory leader’s police bodyguards. Despite being dismissed by Conservative Central Office as the demented ramblings of a mad man with a personal grudge, Nebbit’s theories have found support in some quarters. “There’s long been a rumour that Cameron was the result of an experiment by Conservative mad scientists back in the late 1990s to isolate those aspects of conservatism the electorate had come to see as undesirable,” muses top political scientist Professor John Poppshott. “By suppressing them, they hoped to create a more electable, moderate form of Conservative.” However, Poppshott believes that the base conservative instincts to exploit the weak and powerless for personal profit and disenfranchise the poor are so powerful that, from time to time, they reassert themselves in the form of ‘Mackintosh’. “He’s like a safety valve,” he explains. “Without these regular transformations, Cameron wouldn’t be able to maintain his moderate façade, and would inevitably start spouting right wing reactionary rhetoric in the Commons, or start advocating the arrest of single mothers and black people.” The academic believes that Nebbit was deliberately provoked by Mackintosh into assaulting his alter ego Cameron, so as to discredit his theories. “Now they can keep their secret safe,” he says. “Until the Tories win a general election, that is. Believe me, once he’s Prime Minister, the intoxication of power will leave him unable to control his inner capitalist beast, and Mackintosh will take over completely!”