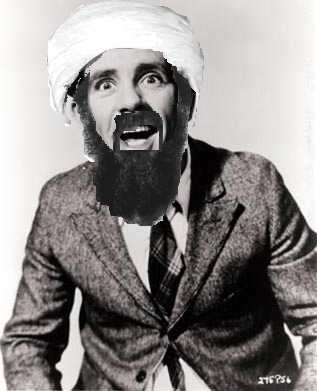 “It’s all a fake, everybody knows that Osama bin Laden died sometime before 2007 and was replaced by a double,” claims Arthur Funhatch, one of a growing number of conspiracy theorists questioning the official US government account of the terror leader’s death. “The key evidence are those pictures, supposedly of Bin Laden, released that year to accompany a new tape. It’s clearly a fake beard he’s wearing. Not only is it darker than the true Osama’s beard, but it is a different shape and the hairline is all wrong. OK, the eyes look similar, but that could just be plastic surgery.” According to the thirty eight year old landscape gardener, senior al Qeada figures panicked when the real Bin Laden died in a mule accident, and rushed a replacement into service. “It would have been a huge blow to their credibility to lose their main figurehead,” he explains. “Especially under such mundane circumstances – the mule he was riding was hit side on by a four-by-four on a mountain track junction, after Bin Laden had ignored a stop sign – at least if he’d been killed by the Americans, they could have made him a martyr!”

It isn’t just the post-2007 photographs of Bin Laden which have fuelled Funhatch’s suspicions, all of the recordings of the terror leader released since then, he believes, contain important clues to the substitution. “Most fundamentally, there’s the issue of his voice, just listen to the recordings put out since 2007 – those most certainly aren’t the mellifluous tones of the real Osama – this guy can barely speak in tune,” he declares. The release by the US government of home video footage, supposedly showing Bin Laden living in his Pakistani hideout, has also served to bolster Funhatch’s theories, rather than counter them. “It just shows some old bloke with a beard watching videos of Bin Laden,” he says. “Why would he be doing that if he was Bin Laden, for God’s sake? It’s quite obvious that he’s a double, watching these old films to perfect his impersonation of Osama!” The US government’s refusal to publish pictures of Bin Laden’s corpse and their hasty disposal of the body by burial at sea, all add weight to the replacement theory, Funhatch believes. “Apparently, the Navy SEALS realised they’d been duped by a double when his beard came off in their hands as they moved the body,” he claims. “Obviously, there’s no way that the US government can admit that it has spent ten years and millions of dollars chasing down a fake, so they’ve effectively been forced to collude with al Qaeda in a cover up!”

Other members of the ‘Osama Was Dead Already’ community disagree with Funhatch as to the nature of the real Bin Laden’s demise, suspecting foul play, rather than an accident. “There have been a lot of theories about his death, apart from the mule accident,” explains Rob Cranny, who runs one of the main web sites devoted to the conspiracy: I Buried Osama. “But, in my opinion, at least, by far the most credible explanation is that he fell victim to an internal dispute as to the future terrorist direction of al Qeada.” According to Cranny, all the evidence points to there having been some kind of internal conflict in the terror organisation, with Osama threatening to break away and form his own group. “Creative differences with right hand man Ayman al-Zawahiri have been cited, with the latter feeling that Osama’s approach to terrorism has become too predictable and outmoded,” opines the forty year old Brighton book keeper. “Whilst Osama remained obsessed with big single events like 9/11, al-Zawahiri favoured a more innovative approach, with large numbers of terror ‘happenings’ involving performance artists.”

Cranny is dismissive of a rival theory, which posits that Osama was assassinated by neo-Nazis when they discovered that he was actually Jewish, a deep-cover Mossad agent out to discredit Islam by creating and funding a fundamentalist terror group which indiscriminately blows up innocent people. “That’s just bloody ridiculous,” he says. “It’s that sort of idiotic nonsense which discredits the whole conspiracy community.” Cranny agrees with Funhatch that al Qeada couldn’t afford to be without its figurehead at such a crucial stage of their terror campaign, so recruited a double. However, he also suspects that the CIA were also involved. “I know that on the surface that might seem crazy,” he says. “But don’t forget that the whole ‘War on Terror’ was justifying US military interventions and expansionism and generally propping up Dubya’s presidency at that time. They couldn’t afford to lose a prime hate figure like Osama – it would have undermined their whole foreign policy. I’m convinced that the CIA helped finance the establishment of the double as a ‘black op’.”

But, who was the fake Osama bin Laden? Or ‘’Faux-sama’, as the ‘Osama Was Already Dead’ community have christened him. Was he, as Funhatch believes, the winner of an Osama bin Laden look-a-like contest held in 2006 at an al Qeada training camp in northern Pakistan? “Osama himself had been one of the judges,” he says. “Apparently the resemblance was quite remarkable, although the guy in question had to supplement his own meagre facial hair with a false beard woven from Yak’s hair.” Once again, Cranny disagrees, believing that, over the past few years, there have been a whole series of ‘Faux’-samas. “The first one, used only as a stop gap, might well have been an amateur competition winner, but I have evidence that they subsequently brought in a professional to double for Bin Laden,” he says. “After extensive photographic comparisons of post-2007 pictures of ‘Faux’-sama and various celebrities, I’m ninety per cent certain that the late Sir Norman Wisdom was behind the beard for around a year between 2008 and 2009.” Cranny points to the fact that during this period Wisdom made no films or TV series and, at one point in 2008, his death was erroneously announced. “That could have been part of a plan for him to completely take on the character of Osama,” he muses. “Obviously, to do that, Norman Wisdom would had to have vanished, but unfortunately most of the media just didn’t buy the story of his death.”

Cranny thinks that Wisdom was an obvious choice to double for Osama, his films being popular in Muslim countries like Iran and Albania, as well as having been a trained stuntman. “. Let’s not forget that there’s a history of comic actors being used as doubles – Don Knotts, as every ‘Paul is Dead’ conspiracist knows -successfully impersonated Beatles’ manager Brian Epstein for several years,” he points out. “Sadly, Sir Norman’s reign as Osama’s double was short-lived, thanks to his declining health, so they’ve had to recruit more doubles.” Indeed, he believes that the figure seen in the supposed Osama home video was simply the latest lookalike. “I’ve still not managed to identify him,” Cranny admits. “Although there’s no denying that he bears a striking resemblance to comic Alexei Sayle.” But the last word on the subject of ‘Faux’-sama surely belongs to a recent poster on the I Buried Osama message boards, who claimed that he’d been told by a cousin serving on board the US aircraft carrier to which Osama’s body was flown, that medics examining it had made a startling discovery. “When they shaved the beard off during the autopsy,” he posted, “they were shocked to recognise him as the real Paul McCartney – the one who was supposedly killed and replaced in 1966!”