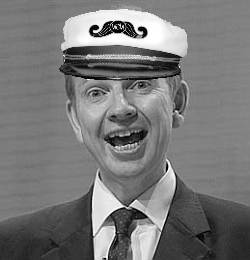 “It’s a proven historical fact that watching the antics of the fabulously rich and privileged does more to boost the morale of the poor and deprived during a time of austerity than any amount of welfare or job creation schemes,” says John Dick-Wadd of the right wing political think tank Foundation For a New Order, defending bonkers Education Secretary Michael Gove’s proposals for a new royal yacht. “Just ask anyone who endured the Great Depression – all those toffs dancing on taxis was all that kept the poverty-stricken masses going as they huddled in their hovels!” However, others suspect that the real story behind his call for a luxurious new royal yacht – made against a backdrop of massive government spending cuts – is somewhat more sinister. Not to mention bizarre. “We’ve seen the secret plans for the vessel – whilst obscenely luxurious accommodation for the entire royal family is included, there is also provision for scores of other passengers, mainly prominent politicians, businessmen and Tory party donors, in only slightly less luxurious cabins,” claims investigative journalist Don Ballgrip, writing in left wing weekly paper The New Democrat. “Most bizarrely, deep below decks there is what appears to be a zoo, with facilities for two of each of several hundred animal species. We’re not just talking livestock like pigs and goats, but also things like horses, lions, even giraffes and elephants! It is as if they were actually building some kind of ark!”

Surprisingly, Dick-Wadd does not deny such suggestions. “Well obviously this vessel has to be multi-purpose if its existence is to be justified,” he explains. “If those tree-huggers are right about global warming – which they aren’t, by the way, but we have to cover all the bases – then the new royal yacht will provide a way to save the best and most important members of our society, along with some other species, as the UK sinks beneath the waves. In the meantime it will provide the younger royals with a perfect platform from which to flaunt their ostentatious wealth. The masses love it – just look at their excitement over the recent royal wedding. It takes their minds off of bankers’ bonuses, rising fuel prices and shrinking social services.” But is the apparent dual-purpose of the royal yacht really that straightforward? Ballgrip thinks otherwise, claiming to have uncovered evidence that Gove is pushing for its construction in anticipation of a global apocalypse, which will destroy all human civilisation. “Gove believes in those Mayan prophecies that the world will end this year – his personal astrologer has told him that civilization will be swept away by a new deluge! Being a keen Bible scholar, he knows that only by following Noah’s example and constructing an ark to carry the best of the human race to safety can there be any hope of survival for humanity!” he says. “Obviously, the ‘best’ will include not just the royals, but senior government ministers, wealthy Tory backers, bankers and financiers. Is it any wonder Cameron is so keen on the idea, or that Lord Ashcroft is financially backing it !”

The ultimate aim of the project, Ballgrip believes, is to be able to found a new society once the waters have receded. A new society based upon the principles of privilege and wealth. “It is Gove’s idea of paradise – a world composed entirely of wealthy sophisticates like himself, with no irritating underclass calling for the redistribution of their hard-exploited wealth in the form of wages,” says the journalist. “Apparently, there are advanced plans to train monkeys to replace the working classes, as they will, quite literally, work for peanuts.” The backers of the Yacht scheme believe that they have strong Biblical grounds for believing in a coming apocalypse. “They believe that we’ve been living through a modern Sodom and Gomorrah, with the financial crash which precipitated the current economic downturn, being the result of the naked greed of the human race,” Ballgrip explains. “They think it is clearly a divine judgement – the Almighty punishing humanity for its sins of greed and avarice! But the financial crash will is only the prelude – the apocalypse itself will wash the sinners away completely, sparing only the righteous to found a new world.”

Whilst it might seem perverse that the shadowy figures behind the project want to save some of the financiers, bankers and businessmen whose activities have precipitated this Armageddon, Ballgrip reveals that they are firmly of the opinion that the financial meltdown was actually the fault of the lower and middle classes, rather than the super-rich. “Apparently it was their relentless demands for social improvement through the acquisition of more material goods and property that forced the financiers to take ever greater risks in order to provide the credit which underwrote it all. Which is why it is the lower orders who will be swept away by the flood!” he says. “On top of that were all the billions of welfare benefit the idle poor were claiming – according to the people behind the ark project that was one of the main causes of the financial collapse, rather than the irresponsible activities of the banks!”

Gove himself is a keen Biblical scholar, as witnessed by his plans to present every school in England and Wales with a copy of the King James Bible – personally signed by him. “Of course, it isn’t just any version of The King James Bible, but a special edition incorporating a new gospel – the Gospel According to Gove, in which he outlines the coming catastrophe and the reasons for it.” Ballgrip alleges. “He is a firm believer in the teachings of Christ – Gove agrees that the meek shall inherit the earth, but only once the wealthy have buggered off somewhere better, taking all the resources with them. It’s no different that when you trade up in the property market – you always take the curtains and light bulbs with you when you move into your mansion, leaving your one bedroom unfurnished flat for a family of benefit scroungers.”

However, the journalist remains mystified as to the variety of animal species the Ark seems planned to accommodate. “Whilst saving endangered species like tigers and elephants might seem very laudable, surely it would make more sense to take more livestock, like cattle, in order provide food for their new world?” he muses. “Not only that, but the kind of people behind this lunacy aren’t exactly known as conservationists, are they?” John Dick-Wadd believes there is mystery to their inclusion. “The answer to that is obvious – once the new world is established, its leaders will need something to hunt, won’t they?” he declares. “Common-or-garden cows and sheep won’t do – they’re used to shooting more exotic stuff for fun, aren’t they?”