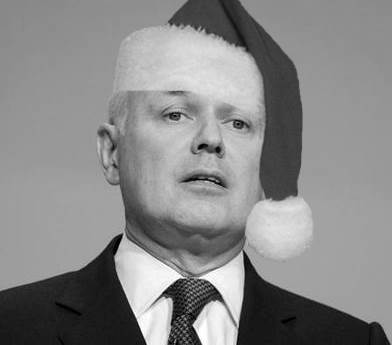 With Christmas approaching, disturbing reports of a Santa-figure stealing presents and wrecking decorations have emerged. “He didn’t even come down the chimney – the bastard just burst in through the front door,” thirty nine year Doris Klynge told the Solihull Observer. “He was dressed in red, a bit like Santa, but instead of being fat and jolly with a beard, he was a mean-spirited bald bastard!” According to the West Midlands housewife, the festive intruder proceeded to examine all of the house’s Christmas decorations. “He measured the Christmas tree and counted the number of balls on it,” she told the local newspaper. “But what really seemed to interest him were the presents under the tree – he counted them, weighed them up and shook them all, before proceeding to shove half of them into a sack and walk off with them, kicking the tree down and tearing down handfuls of tinsel as he left!” Rushing to the open front door, Klynge saw the red robed figure departing, not in a sled, but in a large black limousine. Klynge’s experience is not an isolated occurrence, with similar reports coming from the length and breadth of Britain. “We had this fantastic display of Christmas lights in the front garden – then this bastard dressed in some kind of Santa suit crashed his limousine through the fence and ran over them all!” forty two year old Portsmouth resident Ken Fricked told the Daily Norks. “It was such a mean spirited thing to do – the local kids were in tears when he ran down our illuminated Rudolf!”

Unemployed Fricked – who was laid off from the Royal Naval Dockyard as the result of the government’s defence cuts, tried to confront the anti-Santa. “He got out to try and puncture our inflatable Santa with a pin, so I made a grab for him and demanded to know what he thought he was doing,” recalled Fricked. “He just curled his lip at me and told me that scum like me didn’t deserved to have such lavish Christmas lights – didn’t I know that we were in the middle of a period of austerity?” Before he could accost the red clad marauder further, Fricked found himself felled from behind, apparently by his adversary’s female accomplice, who appeared to be dressed as an Elf. “By the time I got up, they were speeding off down the road, with the bloody Elf woman leaning out of the window flicking v-signs at me,” he told the tabloid. “When I went back into my house, I discovered that the bastards had stolen all the kids’ presents and replaced them with oranges and lumps of coal!” Professor Martin Allballs of the University of Eastleigh, who has been conducting a study of the phenomena, believes that a distinct pattern is emerging. “There’s no doubt that the common denominator between the victims is that they are poor and on some kind of benefits,” the academic enthused to the Daily Excess. “That and the fact that they all seem to have been planning a relatively extravagant Christmas, despite their modest means. It seems to me that this anti-Santa figure is attempting to ‘reduce’ their Christmases to what he considers a more appropriate level of celebration for their circumstances.”

Not surprisingly, many of the victims have objected to Allballs’ characterisation of their Christmas preparations being ‘too extravagant’ for their circumstances. “For God’s sake, I don’t see how having a an artificial Christmas tree and a few bits of tinsel up can be considered ‘extravagant,” retorted forty four year Jim Tiggles, currently on disability benefit after an accident, who had his tree deemed ‘too tall’ by the anti-Santa, who proceeded to lop the top two feet off with shears. “Surely during this era of austerity, having some kind of celebration at Christmas to lift people’s spirits amid the misery spread by the government is even more important than usual? But now we can’t even look forward to Christmas dinner after the bastard stole our turkey, saying was ‘too plump for poor people’ and replaced it with a frozen horse meat lasagne.” Ken Fricked agrees with these sentiments, pointing out that whilst his, now wrecked, lights might have looked impressive, he’d had them fot years. “This would have been their tenth Christmas,” he lamented in the Daily Norks. “It was like losing a member of the family.”

However, the attacks now seem to have switched from individuals to municipal festive celebrations, with several reports of the anti Santa and his Elf helper destroying Christmas decorations in several town centres. “In Hackney, for instance, there were reports of the Christmas lights being shot out with an air rifle by the Elf in a drive by shooting, whilst in Liverpool the city centre Christmas tree was felled by them,” an excited Professor Allballs told the Daily Excess. “Once again, poverty seems to be the common denominator with the most deprived communities having their overly extravagant municipal decorations destroyed – a message, perhaps that they shouldn’t be able to afford such things if they had properly implemented government-imposed spending cuts.” Most excitingly, CCTV footage of these latest attacks have allowed the academic to identify the ant Santa and his Elf helper as Work and Pensions Secretary Iain Duncan Smith and his Minister, Esther McVey. “It’s clear that they are trying to ensure that the appropriate ‘Austerity Christmas’ is the only form of festivities benefits claimants can enjoy,” mused the Professor. “They’re sending a clear message that these people have to learn to live within their means – even at Christmas.”

Whilst Allballs’ claims have been dismissed as ‘ridiculous’ by many political commentators – not least on the grounds that a senior Cabinet minister surely wouldn’t carry out such activities personally – not only does the evidence of the CCTV footage seem incontrovertible, but, incredibly, the Department of Work and Pensions (DWP) has declined to refute the allegations. Indeed, a source within the department has told The Sleaze that Iain Duncan Smith doesn’t trust any of his civil servants to carry out his latest policy, hence the personal touch. “It’s well known that staff in the DWP have consistently conspired against Duncan Smith,” said the source. “Just look at the mess they’ve made introducing his brilliant universal benefits system – it’s no wonder that he’s taken the delivery of this policy on personally.” According to the source, Duncan Smith – with the backing of Prime Minister David Cameron – has decreed that only ‘hard working’ Britons deserve a ‘proper Christmas’, with benefits claimants being restricted to a standard ‘Austerity Christmas’, “Look, Christmas isn’t a right, you know. It’s a privilege you have to earn through hard work,” the source told us. “But the ‘Austerity Christmas’ isn’t that bad – it just restricts participants to a set size of tree and number of decorations, a set number of presents – none to exceed a modest monetary value – and an economy frozen Christmas dinner. The people having their decorations taken down by Duncan Smith should think themselves lucky – at least they’re getting a Christmas. There are some claimants out there who have been sanctioned as a result of missing Job Centre appointments or refusing workfare placements, who are banned from having Christmas altogether.”