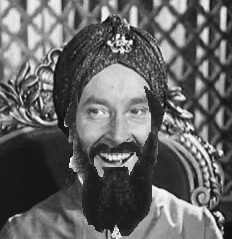 Producer Quentin Jodrell has unveiled his audacious plans to make a new series of the ever-popular Carry On films, using modern digital technology to virtually resurrect the original cast. “That’s where all the previous attempts to revive the series have foundered – they’ve just been excuses to stick a bus-load of second-rate TV actors and comics in a crude knockabout comedy, with no attempt to address contemporary issues,” explains Jodrell. “But the public don’t want the likes of Julian Clary or Barry from Eastenders telling knob jokes – they want the real deal! They want Kenneth Williams and Sid James in their puerile prime in comic situations which address contemporary issues that modern audiences can relate to!” Consequently, Carry on Bombing is planned as the first film in the new series. Ripped straight from the headlines, this everyday tale of suicide bombers and Islamic fundamentalists aims to satirise the ‘War on Terror’ through the ironic medium of bawdy humour. “It really wrote itself, Kenneth Williams was obviously perfect for portraying a highly strung Osama Bin Laden/Abul Hamza- type spiritual leader – complete with long beard, turban and a hook instead of one hand – sending out his suicide bombers from his secret base underneath Finsbury Park Mosque, in an attempt to bring London to its knees,” says the film’s writer, Sherman Tank. “From there, it seemed only natural to have Sid James as the metropolitan Police Commissioner – forever taking time out from the ‘War on Terror’ to sexually harass some WPCs – and Charles Hawtrey as the Homo, sorry Home, Secretary (who’s busy using MI5 surveillance teams to voyeuristically spy on toilet cubicles).” The late Joan Sims is slated to feature as the commissioner’s wife (also the object of Kenneth Williams’ Mad Mullah’s affections), whilst Bernard Bresslaw is planned to appear as Williams’ manic sidekick with the likes of Peter Butterworth, Jack Douglas and Kenneth Connor as incompetent suicide bombers who keep hilariously blowing up the wrong targets. “We were also hoping to feature Barbara Windsor as a comic undercover policewoman who smothers a suspect suicide bomber to death with her ample bosom, only to find he was just an ordinary flasher,” claims Tank. “But unfortunately, she’s still alive, so we’d have pay her for the use of her image, and the budget just won’t stretch to that.” Despite the absence of Windsor and her outsize breasts, Jodrell and Tank are promising a host of great sight gags in the Carry On tradition, including Kenneth Williams nearly poking his eye out and scratching his backside with his hook hand, and Jack Douglas hilariously detonating his bomb inside the mosque by accident, during one his trademark comedy ‘fits’.

Although Jodrell’s plans have been condemned by critics as being tasteless, the producer isn’t worried that potential backers might be put off from investing in the new film. “That’s the beauty of using virtual performers – production costs can be slashed dramatically,” he points out. “These movies can be banged out so quickly and cheaply that they’re bound to make a profit!” Indeed, so confident is Jodrell that Carry on Bombing will be a success, that he is already planning a sequel: Carry On Up The Khyber Again. “This time we’ll be taking on the war in Afghanistan, with Kenneth Williams’ Mad Mullah having escaped there only to find himself hunted down by the British Army,” he enthuses. “Terry Scott could be brought in as a repressed homosexual sergeant major who is forever comically abusing his privates! I can see it now: Bernard Bresslaw and his Taliban hordes put to terrified flight by the sight of a platoon of Royal Marines wrestling naked in mud, whilst their officers, clad in women’s clothing, look on!” However, Jodrell accepts that some audiences could be alienated by the highly politicised subject matter of these proposed new

The producer is dismissive of those in the film industry who believe that his plans simply represent a ‘recycling’ of old ideas, no better than Hollywood’s current obsession with remaking, sequelising and ‘reimagining’ classic movies, and are a backward step for British films. “All I’m trying to do is use a traditional, tried and tested, formula to present radical examinations of contemporary issues in a format audiences can engage with,” he fumes. “Surely that’s more forward looking than turning out endless Jane Austen adaptations, lottery-funded straight-to-DVD gangster movies and arty-farty literary adaptations seen by three paying customers, if they’re lucky?” He promises to continue using his new Carry On series to present searing satires on the burning political and social issues of today. “We were thinking of doing an updated version of Carry On Teacher, set in a modern inner-city school,” Jodrell says. “It could feature Frankie Howerd as a hypocritical schools inspector who once slept with a pupil – the twist being that it was a male pupil who is now a teacher at the school he is inspecting! The film could climax with the persecuted teaching staff giving him a bloody good caning in the gym, before the ex-lover gives him one up the jacksie!” Jodrell still hopes to persuade Barbara Windsor and other surviving cast members to allow their images to be used in the new films. “Clearly, they’d be virtually enhanced to take them back to their prime,” he says. “Barbara Windsor, for instance, would need some restoration work doing on her bust, It is sagging a bit these days, isn’t it? Punters today will want to see something a bit more pert!” He also believes that the virtual recreation of the Carry On stars will allow them to ‘cast’ against type. “Kenneth Williams, for instance, could be portrayed as a virile bisexual shag machine, rather than a wimpy homosexual mummy’s boy,” Jodrell opines. “The possibilities are endless!” Much hilarity, no doubt, will ensue.