I Was Farage’s Double! 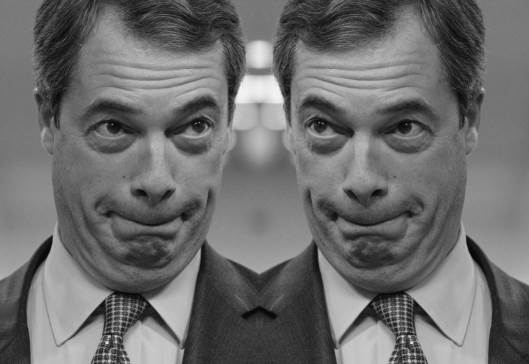 In the wake of the UK Independence Party’s (UKIP) ‘stunning’ local and European election victories the extraordinary story of the subterfuge perpetuated by the party’s leader on the media and enemies, has been revealed in the book I Was Farage’s Double. The book’s author, Southampton accountant and amateur actor Marty Cliffey, claims that, because of his uncanny resemblance to Nigel Farage, he was plucked from obscurity to act as a decoy for the UKIP leader during the recent election campaigns. “It was my party piece – taking the piss out of Farage,” he explained at the book’s launch earlier this week. “Apparently that’s when I was first spotted by them – at the company Christmas Party, where I was strutting around groping women and bellowing amusing racist comments at colleagues of Eastern European origin, all whilst holding a pint of beer and a fag. Anyway, it turned out that one of the company’s directors was a big wheel in the local UKIP branch!” Initially fearing the sack when summoned to the director’s office in the New Year, Cliffey instead found himself being offered a job. “Apparently the party’s top brass were worried that the press were planning to ambush Farage with questions about stuff like policies at every possible opportunity in order to try and discredit and embarrass him in the rub-up to the elections,” he explained. “So they wanted me to do my Farage act, the plan being for me to draw as much attention to myself by acting the buffoon in, say, a pub in Gateshead, drawing the press’s attention, whilst the real Nigel Farage was in somewhere like Lowestoft, schmoozing real voters rather than dealing with journalists!”

According to the book, the strategy was to confuse the national press, encouraging them to print stories about the fake Farage’s bizarre conduct, then forcing them to contradict themselves in the face of evidence from local press and members of the public that Farage had actually been elsewhere, campaigning sensibly. “We really ran them ragged,” chuckled Cliffey. “We were sure that they’d rumble us, but they never did – not even Nick Robinson. He really thought that he’d scored a hit against Farage when he tackled him over his EU expenses and employing his German wife. Except that it was me, not Farage that Robinson was talking to – that’s why he ultimately failed to actually get anywhere in that interview: I didn’t know what the bloody hell he was talking about! Of course, within a few hours the real Farage had been able to smooth it all over with a few considered statements to the media.” However, some commentators have argued that the use of a double nearly backfired badly on UKIP, pointing to the notorious LBC radio interview in which Farage appeared to come close to making racist comments about Romanians and faltered badly. “Their double’s lack of preparation resulted in a near catastrophe,” Sunday Bystander political correspondent Adrian Fluff claimed when reviewing the book for his newspaper. “His performance as Nigel Farage was so convincing that it left listeners convinced that he was losing his marbles mid-election, potentially alienating swathes of potential middle class voters. Whilst the party tried to pass it off as the result of Farage being unwell, it is notable that they subsequently failed to make any electoral headway in London.”

Cliffey has taken issue with the review, alleging that he wasn’t at the LBC interview – it was actually the real Farage in the studio that day. “The fact is that I was in the lounge bar of a pub in Redcar that morning, performing ‘Knees Up Mother Brown’ whilst downing a pint,” he told the Daily Excess in an exclusive interview. “The idea was to try and draw the press and leftie immigrant-loving protesters away from London, so that Farage could conduct his interview in peace. I was as surprised as anyone else to hear that he’d gone completely bonkers live on air!” Cliffey quickly found himself thrust into the front line, required to impersonate Farage at real events for the next few days. “The fact was that the party wasn’t lying – he really had been taken ill,” he says. “But it wasn’t a virus or anything like that – he’d been poisoned! Probably by some Eastern European bastards masquerading as caterers, so the party top brass reckoned.” Suddenly, Cliffey was expected to behave in a statesman-like way for the benefit of the press and voters, putting Farage over as a serious politician.

“It was quite a culture shock,” he told the Excess. “One moment I was doing pratfalls, cracking mildly racist jokes, making sexist comments and slipping up on banana skins, the next I was expected to make coherent arguments as to why Britain should leave the EU. I really didn’t think it was possible.” Indeed, Cliffey’s difficulties in impersonating Farage as a rational human being and political leader soon brought him into conflict with UKIP’s leadership. “They didn’t appreciate my attempts to bring some actual policies other than ‘We hate the EU and immigrants’ into the campaign,” the accountant claimed in the newspaper interview. “They vetoed my attempt to commit UKIP to greater autonomy for the English regions by strengthening local government, for instance, saying it would undermine the party’s credibility with non-English voters.”

Relations between Cliffey and UKIP were further strained when he learned that the ‘poisoning’ incident hadn’t been the first attempt on Farage’s life. “It transpired that plane crash he was involved in on the eve of the 2010 General Election hadn’t been pilot error at all,” he revealed. “In reality, the light plane he was in, towing a UKIP banner, was shot down by another aircraft! Apparently, Farage later told close colleagues that it had come out of the sun at them, guns blazing! He swore that it was a World War Two German Messerscmitt Bf 109, but that instead of Luftwaffe markings, it had the EU symbol on its wings!” Cliffey realised that, in addition to acting as a press decoy, UKIP had been using him to try and distract EU assassins from the real Farage. “It all came to a head when this group of multi-national commandos attempted to assassinate me – or rather Farage – by pelting me with eggs during a walkabout in Cromer,” he asserts. “They were definitely off – if any of that yolk had gone into my mouth, it could have had serious consequences. I;ve no doubt that they were full of dangerous germ cultures! That was the day I told UKIP that enough was enough and resigned!” For its part, UKIP has strenuously denied that it has ever employed a double for its leader, stating that Mr Farage was more than capable of confusing the press by himself. They also reiterated that his 2010 plane crash had been the result of pilot error, not enemy action.