Jingle All the Gay! 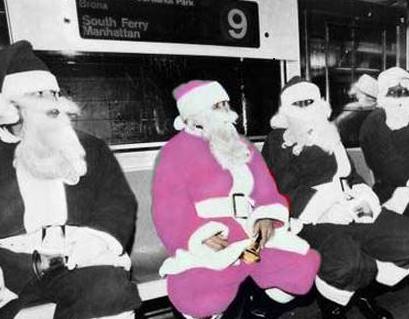 “I told my children that Santa wouldn’t be visiting this year because he had died in a road accident,” says Sandhurst father of two Joe Ripbottom, turning puce with anger at the memory. “At first they didn’t believe me, so I had to mock up a picture on Photoshop, showing Santa’s sleigh in collision with an articulated lorry on Oxford Street – bits of reindeer and blood-spattered presents everywhere – and show it to them. Obviously, they were distraught, they cried for days afterwards and still have nightmares. But I’d rather them think Father Christmas had been decapitated on a busy London street than have them learn the disgusting truth!” Ripbottom is one of a large number of parents outraged by Santa’s recent decision to ‘come out the closet’ and announce that he is gay. “For God’s sake, Christmas is meant to be about family values,” fulminates the forty one year old assistant bank manager, who, with other like-minded parents, has formed a protest group which aims to have Santa replaced by a more suitable role model for young children. “Then this bastard declares he’s a raving bum boy who’s spent the past hundred years or so getting up to God knows what kind of depravities with those elves! My God, it’s tantamount to child abuse!” Another leading member of the group, Fifty year old father of five Walter Stuffer, is at pains to deny that they are homophobic. “We’d feel just the same if he’d revealed that he had a criminal record, or had suffered mental illness, say. I mean, in either of those cases, would you want such a person creeping around your house at dead of night, stealing into your children’s bedrooms?” asks the Wokingham accountant, who admits that he has told his children that Father Christmas had committed suicide after learning that his favourite reindeer would have to be put down. “Obviously, you’d want to be sure of their safety. Consequently, all we’re asking is that the authorities ensure that the person responsible for bringing cheer to our children at Christmas has been properly vetted.” However, other members of the group have taken a less temperate approach. “If I catch that perverted old bastard anywhere near my kiddies, I’ll blow his bloody head off,” declares Warwickshire farmer Fred Dungle, who reveals that he has prepared a surprise for St Nicholas if he does try to visit this Christmas. “It’s not mince pies he’ll find when he comes down that chimney – I’ve rigged a shotgun in the fireplace! He’ll get both barrels up his jacksie – see how he likes taking that up the arse!”

To try and avoid any of its members from taking matters into their own hands, the group has engaged the services of a solicitor to explore legal avenues for keeping Santa away from their children. “We’re applying to Ascot Magistrates Court for an Anti Social Behaviour Order, keeping him away from every chimney in Britain,” explains Brian Stappler, of legal firm Wang, Wick and Wacker Associates. “We’re quite confident of success – I mean, he does have form, doesn’t he? Breaking into all those houses, year after year.” Whilst many of his critics are upset at what they see as years of deception on Santa’s part – claiming that for years he pretended to be a normal family man, whilst secretly indulging in depraved practices – the man himself insists that ant ‘betrayal’ is entirely in the minds of his accusers. “It isn’t as if I’ve ever actively tried to give the impression that I was heterosexual,” he explains. “I mean, I’ve always dressed flamboyantly, and there’s never been a Mrs Claus, has there? My North Pole operation has always been conspicuously single sex, too. If anyone had ever stopped to think, it should have been obvious to them.” Santa also claims that lurid tabloid stories of wild gay orgies at the North Pole between Christmases are very wide of the mark. “Look, everybody there is in a monogamous relationship – even the reindeer, Donner and Blitzen have been an item for years. Besides, we’re only at the North Pole for a couple of weeks every year,” says the white-bearded festive icon, who also scorns rumours that he is planning a Christmas day same sex civil union with Jack Frost. “For goodness sake, for the past thirty years I’ve been living with an interior designer named Bernard in a small cottage just outside Sevenoaks!” According to Father Christmas, he felt he had no choice but to ‘come out’, when he learned that a British tabloid was planning to run a story ‘outing’ him under the title ‘Jingle All the Gay’. “They’d got hold of some photographs taken at an Oslo gay club,” he says. “I’m afraid I was acting very indiscreetly – Bernard and I were going through a rough patch in our relationship – I had rather too much to drink and ended up dancing with two Norwegian sailors dressed only in my boots and a set of sleigh bells!” Consequently, Santa gave an interview to Gay Times, in which he frankly discussed his sexuality, although he didn’t pose for a naked centre spread, as some sources have tried to claim.

Claus insists that his sexuality has no bearing on his job, denying that it poses any threat to children. “It’s not is if I’ve suddenly become gay – I was homosexual all the time I was visiting Children’s bedrooms over the past few decades,” he points out. “I think you’ll find that crime statistics will confirm that historically there has never been any significant increase in children being buggered in their bedrooms over the festive period.” Indeed, as he points out, if was ever tempted to take advantage of anyone, it would be male adults, rather than children. “I’m gay, for God’s sake, not a paedophile. If anyone’s arses are in danger, it would be these protesting fathers,” he says. “It’s not as if the opportunity isn’t there every Christmas, as they’re lying in bed in an alcoholic stupor as I creep down their chimneys. Not that I’ve ever found any of their fat, saggy middle class arses remotely attractive. Perhaps I should put them on my ‘naughty list’ this year, and give them all a good spanking!” Whilst made in jest, this last threat has resulted in the leaders of the father’s group opposing a gay Santa demanding police protection for their bottoms this coming Christmas night. However, they aren’t the only ones unhappy at Santa’s coming out this Christmas. “It’s doing my business no good – on the one hand a lot of parents won’t let their kiddies come into my grotto because they think I’m a nonce, on the other I’ve had a huge increase in big butch blokes coming in, sitting on my knee and asking for a kiss,” claims sixty-nine year old Sid Joggles, who has been a department store Santa for over forty years. “You just can’t seem to win. A lot of people expect you to speak in a camp voice and mince about all limp wristed. But if you do that, there’s always some other bastard who’ll give you a kicking and call you an ‘arse bandit’, or a ‘nonce’!” Indeed, police have reported a steep increase in the incidence of homophobic attacks on men dressed as Santa Claus, with several Father Christmases being attacked by gangs of skinheads and having their grottos trashed. For his part, the real Santa remains unrepentant, promising he’ll be on the job as usual this Christmas. “Have no fear – I’m queer, I’m here and I’m going to spread some seasonal cheer,” he reassured the world’s children, as he prepared for this year’s festive season.