The Big Political Sell Out 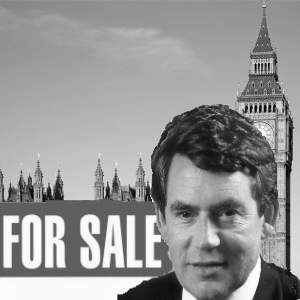 With its poll ratings hitting rock bottom, nearly bankrupt and following a series of humiliating by-election defeats, the governing Labour Party is facing the prospect of being classified as a ‘failing’ political party and being put on ‘special measures’. “The consequences of ‘special measures’ could be devastating,” warns political analyst Jim Throng. “Schools and other public institutions given this status have found themselves facing the prospect of private companies being brought in to manage them. There is very real danger that the Labour Party could now find itself the subject of a similar corporate takeover in an attempt to improve its performance.” Throng believes that within weeks Prime Minister Gordon Brown and his cabinet could find themselves replaced by a Chief Executive and a board of directors. “I’ve no doubt that the first thing they’ll do is try to cut costs by trimming the payroll – there’s no way that the party needs all those backbenchers. Just so long as they have a simple working majority they can remain in power,” muses the analyst. “They could even raise some cash by selling off the vacant seats to the highest bidders. I’m sure there are plenty of people out there who would quite fancy being an MP, but don’t want to go through all that electoral nonsense.” Backbench constituencies aren’t the only party assets likely to be sold off, Throng believes. “The MPs offices at the House of Commons, for instance, could be let out as accommodation.. Believe me, central London addresses like that with a view of the Thames could command very substantial rents,” he says. “Another possibility is putting their policies up for sale – if they’ve got a particular policy another party likes, they could let them have it, for a price. Mind you, right now I doubt they’d get many takers for anything in their manifesto.” Not surprisingly, many Labour MPs are deeply unhappy at this prospect. “You can’t go around selling off constituencies like that! The whole idea runs counter to the very notion of parliamentary democracy,” comments backbencher Dan Wigginthap. “Then there’s the whole constitutional question – is it right that we should suddenly find ourselves governed by an unelected and unaccountable management team, pursuing short-term profits for their shareholders rather than the public good?”

However, others are more enthusiastic at the prospect of a corporate takeover for the party. “It worked wonders for the Tories,” observes former Labour advisor Frank Bummerlee. “Until a couple of years ago they were going nowhere – they were in a worse position in the polls than we are now. But once they brought in that new management team, they’ve been beating the pants off of us at every turn.” Indeed, the Conservative’s takeover by a group of City financiers, which saw hitherto obscure stockbroker David Cameron installed as leader, has sparked a renaissance in the party’s political fortunes. “It’s bloody fantastic, freed from all that ideological baggage, the sky’s the limit as far as policy goes,” enthuses Clive Shagbagg, now one of the party’s senior policy advisers, formerly a marketing executive with a well known frozen food vendor. “We can run the party along business lines now – purely profit-and-loss. If a policy isn’t selling, we just drop it. Take the opposition to forty-two days detention for terror suspects – its obvious the public weren’t buying in, so we’ve quietly dropped it, along with all that other civil liberties stuff. “ Shagbagg claims that the new, streamlined, Conservative Party Corporation is firmly customer focused. “It’s the only way in today’s volatile electoral market,” he declares. “In the past political parties have spent far too much time trying to convince voters that obviously unpopular policies were morally desirable, or would benefit them in the long run. The reality is that ideology doesn’t sell. People just want to know who can sell them the things they want – education, health, security, law and order – cheapest.” Although dedicated to giving voters what they want, Shagbagg does admit that they aren’t above employing sales tactics to try and clear their inventory of old and unpopular policies. “Sometimes we just repackage the old stuff and try to sell it to the electorate as something new – just like our health and tax policies,” he concedes. “Alternatively, we can bundle them with something more popular in a two-for-one offer: free privatisation of healthcare with every income tax cut, that sort of thing. The supermarkets do it all the time. Punters love to think they’re getting a bargain” This consumerist approach to politics certainly seems to have paid off, with the Tories riding high in the popularity polls, leaving Shagbagg confident of victory at the next election. “Once we’re in power, we’ll offer the party up for sale,” he says. “We’ve already had expressions of interest from several wealthy overseas investors dependent upon our regaining power.”

With Labour facing the possibility of being put on ‘special measures’ following the Summer recess, it is believed that the leadership is trying to persuade IT tycoon Sir Alan Sugar to bid for the contract to run party. It is thought that they are keen to broker a deal with Sugar, widely believed to be a New Labour sympathiser, which would see Gordon Brown retained as a figurehead with the courtesy title of Prime Minister. However, Richard Branson’s Virgin group is fast emerging as favourite to take over running of the party. “I know that people will say that we don’t have any experience of government,” says company spokesperson Dale Prissfold, “but we didn’t know anything about running trains, airlines or internet service providers, either. But look what a fantastic success we’ve made of all those enterprises!” According to insiders, Branson’s plans are well advanced, with a new marketing strategy for the beleaguered party already worked out. It is thought that one of Virgin’s first acts, if they were to win the takeover battle, would be to wind up the party’s internal policy-making organs and outsource their functions to independent think-tanks. “Putting policy out to competitive tendering would ensure that we got the very best policies,” explains Prissfold, “formulated on the basis of value for money rather than narrow ideology and party dogma.” He also denied that the party would be rebranded ‘Virgin Politics’, although he refused to rule out a rumoured marketing deal which would see a discount on the company’s phones, internet and cable TV services being offered to electors in exchange for their votes. However, it seems likely that Virgin could face a stiff challenge for the Labour franchise from a surprise bidder – the Liberal Democrats. “Look, taking over the governing party is probably the best chance of power we’re going to get,” says party leader Nick Clegg. “Let’s be honest, it’s probably the only chance we’re ever going to have.” There is, of course, a precedent for such a move: following the last General Election, the British National Party actively considered making an offer for the Tory party, before concluding that it was too right wing for them.