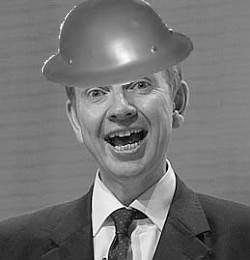 “I’m tired of left-wing historians interpreting World War Two in such a negative fashion – they place far too much emphasis on the decline part of the Third Reich, for instance. Why can’t they focus on the positive, early years, of the war, when everything was going well?” declares Zach Wildebottom, controversial historian and former adviser to bonkers Education Secretary Michael Gove. “It’s an extraordinary story of success! A small, put-upon nation, subjugated by the international community and, only a few years earlier, an economic basket case, rises to become the most influential country in Europe!” Wildebottom’s astounding critique of the way the rise of the Third Reich and World War Two are taught in Britain’s schools comes hard on the heels of Gove’s claims that pupils were being given a warped view of World War One by left wing historians, writers and film makers. Whilst Gove’s views – which saw him become embroiled in a heated argument with a fictional character from the 1990s TV series Blackadder Goes Forth – have been widely condemned for the ignorance of actual history they show, his former adviser’s opinions, aired all last week in the Daily Excess, have been described as ‘downright dangerous’ by leading historians and educationalists.

“It’s typical of Gove’s department -they seem determined to throw common sense out of the window entirely when it comes to education, replacing facts and well-researched argument with dogma and crackpot prejudices,” Professor Tim Hardwood, Chair of History at Chiswick University, told the Sunday Bystander. “It is quite clear that their proposed curriculum changes have a crude political agenda – anything that doesn’t support their right-wing fantasies of the glories of imperialism, the triumph of capitalism and the natural justice of the class system is dismissed as being ‘left-wing’. Critics are ‘pinkos’ and ‘commies’ and objectivity reclassified as ‘Marxism’! Even by their standards, though, this latest attempt to rewrite World War Two and the Third Reich in ‘positive’ terms is a step too far.” Wildebottom’s enthusiasm for reinterpreting the Secondon World War remains undimmed in the face of such criticisms. “These damned lefties just have to try and put a negative spin on it all – the war, the Third Reich, the whole lot, “ he told Daily Excess readers. “They are planting the dangerous idea in children’s heads that war is an entirely bad thing and that right of centre governments are evil and incompetent! It’s quite obvious what their agenda is: the right can’t even win a war, even when they’ve got a head’s start! Never mind the fact that until 1943 it was all going so well for Germany. They don’t want to give credit for that do they? Why mention the successes in Poland, the Low Countries and France when you can instead bang on about Stalingrad, El Alamein and bloody D-Day?”

Wildebottom, who recently left his position as a special adviser to the Education Department to take up a post at a US think tank in Montana, believes that the prevalent negative perception of the Third Reich is blinding us to the lessons we could learn from its rise. “Really, it should be held up as a model for economic recovery – they subjugated Europe militarily but still didn’t have to put their industry onto a war footing until 1943, the German economy was so strong!” he entused in the pages of the Excess. “Imagine that – they could produce tanks and planes in vast volumes whilst still retaining the capacity to produce consumer goods! I’m telling you, the German people had never had it so good – prosperity, full employment and free from lazy gypsies and immigrants!”
However, the historian does concede that there are grounds for criticising the Third Reich. “Sure, there was the genocide and the concentration camps. But if you take them out of the equation – and they were only a relatively small part of the regime’s activities – then there’s a lot to be positive about,” he claims. “But even with regard to the camps, can’t we try to look at the positives? The sheer efficiency of the whole operation, the logistics and organisation needed to eliminate millions of people over such a short period? Surely our industries could learn lessons from that in order to improve their productivity?”

Wildebottom has expressed astonishment that left-wing historians have persistently painted such a negative picture of Germany and World War Two since 1945. “You’d think these pinkos would want to look at the positive side of the rise of Nazism, wouldn’t you?” he declared to Excess readers. “After all, without Hitler there wouldn’t have been a Second World War and without that there would never have been the empowerment of Britain’s working classes that resulted in the post-war welfare state! Hitler should be a bloody hero to the left!” He also believes that the left should be embracing the opportunities for social mobility total war afforded. “We have to put a positive spin on it all. Take the blitz – it’s always portrayed as some kind of grim ordeal Londoners had to endure, whereas in fact we should be teaching that it was an exercise in slum clearance – by destroying all those horrible working class hovels it gave us an opportunity to eventually replace them with attractive high class apartments,” he opines. “And let’s not forget the benefits that the bombing of civilians brought to the working classes: the opportunity to get away from the polluted atmosphere and stress of the city and be evacuated to the clean air and calm of the countryside! There’s no doubt that it was a lovely war!”

Most audaciously, Wildebottom has suggested that the version of the history of the Third Reich and Second World War currently taught in schools could be damaging Britain’s interests in Europe.  “This interpretation of the war is in danger of poisoning our relations with our European neighbours: it portrays the Germans as genocidal aggressors, the Italians as buffoons, and the French, Dutch and Belgians as weak victims!” he points out. “Worst of all, it gives the impression that Europe has to rely on the US to bail it out of a crisis!” The Department of Education has been keen to point that Wildebottom’s views are entirely personal and do not represent departmental policy. Moreover, according to a spokesperson, they are unlikely ever to become official policy: “I’m afraid that his clear pro-European sentiment, emphasised in his latest comments, is what made his position at the department untenable. We really can’t have this kind of bias creeping into education policy.”