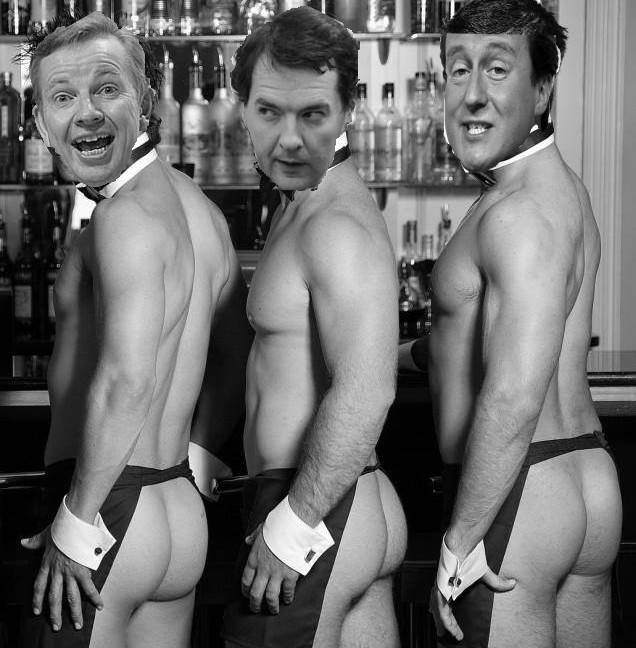 The government is bracing itself for more embarrassment amid rumours that a further batch of nude photos of prominent Tory Ministers and MPs are set to be released online. Still reeling from last week’s release of candid naked photos of cabinet ministers, including Foreign Secretary Philip Hammond, Health Secretary Jeremy Hunt and Justice Secretary Chris Grayling, to a variety of file-sharing sites and web forums, Downing Street is already engaged in damage limitation measures. “Most of these pictures are obvious fakes produced in Photoshop by sticking a cabinet minister’s head on the body of a naked model,” Lord Clinker, Deputy Chairman of the Conservative Party, told the press. “Honestly, who is ever going to believe that Chris Grayling looks that buff without his shirt on or that Philip Hammond has such tight buttocks?” However, ministers have been forced to concede that at least some of the pictures might be genuine and could have been obtained by the hacking of private cloud storage accounts. “It’s perfectly normal for a chap to have naked pictures of himself – the odd discreet shot taken in front of the mirror in the privacy of one’s own home,” Clinker claimed. “Just a few poses for fun. You know: ‘The Thinker’, body building poses and that one where you hide you tackle between your legs and pretend to be a woman. Everyone does it, don’t they? We did it all the time in the dorm at Eton.”

However, it has pointed out that many of the pictures so far released are clearly not innocent shots taken in front of bedroom mirrors. “Some of these images feature the ministers in pornographic poses: oiled up and thrusting their bits at the camera – Jeremy Hunt is pictured rubbing ice on his nipples” Jimmy Gimpster, Political Correspondent of the Daily Norks, told Evan Davis on BBC’s Newsnight. “Several also featured unnatural acts with fruit. It’s all quite disturbing that grown men, let alone government ministers, should be taking pictures like this of themselves, then storing them in the cloud, possibly the least secure place imaginable!” Nevertheless, the government maintains that, whatever the content of the photographs, they were never intended for public consumption and their publication represents a gross invasion of ministers’ privacy. “Let’s not forget that these were effectively stolen from private cloud storage accounts by hackers – probably spotty teenagers living on benefits instead of getting bloody jobs – then plastered all over the web,” Clinker told Radio Four’s Today programme. “Frankly, I think that anyone looking at them is committing a crime, the same as if they watch any of those awful beheading videos those Jihadists keep putting on the internet. There is absolutely no public interest being served by putting these photos into the public domain.”

Not surprisingly, Gimpster takes a different perspective on the release of the photographs. “They’re certainly criminal – nobody should have to see things like that,” the newspaperman claimed on Radio Five Live. “But there’s a clear public interest in inflicting them on the general population in that they clearly show the fundamental depravity of these Tory bastards. The photos expose them as a bunch of wealthy decadent hypocrites – forever lecturing the poor on morality whilst spending their time fingering themselves on film.” Gimpster has also cast doubt on the notion that the photographs were entirely innocent and taken only for the personal consumption of the subjects. “Oh come on, what kind of person does that?” he asked on Jeremy Vine’s Radio Two programme. “Surely if the pictures were only for personal use, they’d have kept them on their own private laptops or cameras? Or on a data stick kept locked in a safe? Why on earth would you put them anywhere on the web? everything on the web gets hacked! If NASA and the CIA can have their files hacked then why would anyone think that their nude pics would be safe anywhere in the cloud?” Gimpster suspects that the MPs whose photos have been published could actually have been involved in some kind of exclusive photo-sharing club. “I’m not saying they were gay, or anything – although all of the Tories so far exposed have been male – but swapping nude pictures of each other is just the sort of thing I could imagine those narcissistic bastards doing,” he explained to Radio One’s Nick Grimshaw on the Breakfast Show. “All telling each other how wonderful they look, what finely sculpted thighs they have, that sort of thing.”

Mystery still surrounds the identity of the hackers and what their motivation might be. “Clearly they aren’t interested in money,” mused Gimpster during an appearance on Gardener’s Question Time. “They could have sold the photos to a newspaper for a small fortune, or just used them to blackmail the Tory bastards, but instead they released them onto public forums and file sharing sites where anyone could access them for free. They’re obviously some kind of political radicals, determined to take down the government by exposing its decadence and corruption.” Others have theorised that the culprits motivation has less to do with toppling the government and more to do with demoralising the British public. “These images are pretty horrendous, seeing what our leaders look like naked is enough to make anyone despair,” opined Howard Hinke, Parliamentary reporter for the Sunday Bystander, in a guest appearance on the BBC’s One Show. “According to my sources in British Intelligence, these photos have been hacked by Muslim extremist cyber-terrorists, who are seeking to destroy the UK’s morale if the government doesn’t accede to their demands.” Allegedly the cyber-terrorists are threatening to release naked photos of Communities Secretary Eric Pickles, bonkers Chief Whip Michael Gove and Work and Pensions Secretary Iain Duncan Smith if the government doesn’t cease its bombing of ISIS targets in Iraq. “If the sight of Pickles alone doesn’t destroy public support for military action against ISIS, nothing will,” claimed Hinke.

The past twenty four hours have seen more sinister developments, with a picture of a fully clothed David Cameron accompanied by a clock ticking down from thirty six hours beside it, appearing on several social media sites. “The obvious implication is that if the Prime Minister either does, or fails to do, some unspecified act within the next thirty six hours, nude pictures of him will be released,” Gimpster told Graham Norton on his chat show. “There are rumours that far from being Muslim extremists behind the nude photo plot, it could actually be a militant splinter group of UKIP and that they’ve given Cameron an ultimatum: fully commit to withdrawing from the EU and deporting all foreigners, or we’ll show the world your unimpressive cock.” In a possibly related development, a series of photos of male genitalia have appeared on a popular photo-sharing site. “They’re a pretty sorry looking bunch,” said the Daily Norks reporter. “We think that they all belong to government ministers, but so far the only one we’ve positively identified belongs to disgraced Civil Society Minister Brooks Newmark – we were able to match the picture up with that photo of his cock and balls he sent that reporter, thinking they were a young woman.”