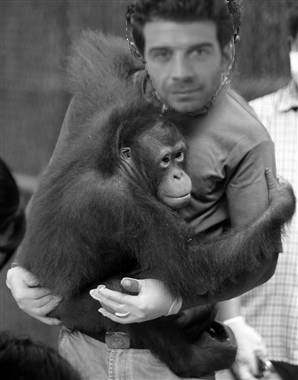 In an extraordinary turn of events, viewers of the BBC’s recent Saving Planet Earth – a TV event designed to raise funds for the preservation of endangered species – witnessed self-styled celebrity Nick Knowles embark on a frenzied killing spree which claimed the lives of several orang-utans. Broadcasting live from a tree-top hide in a Madagascar orang-utan sanctuary, Knowles became enraged when he learned from the programme’s London anchor, pint-sized TV gardener and part-time sex novelist Alan Titchmarsh, that so far only eleven pounds and seventy two pence had been donated by the public. Screaming “Don’t you tight-fisted bastards realise what will happen to our wildlife if you don’t start coughing up?” Knowles dragged an obviously terrified orang-utan onto the balcony of the hide and cut its throat, before hurling its lifeless body to the ground. The wild-eyed home improvement guru – famed for presenting such seminal programmes in the genre as DIY SOS – then threatened to kill another orang-utan every thirty minutes until the total cash pledged by viewers reached fifty thousand pounds. “You stingy shits sitting in your cosy living rooms just don’t get it, do you? Twelve orang-utans die every day because of lack of funding,” he raged, waving a machete at the camera. “Well, if twelve die tonight, it’ll all be your bloody fault!” The BBC switchboard was immediately inundated with complaints from shocked viewers, preventing callers wanting to pledge money from getting through. Consequently, another four orang-utans died before Knowles’ funding demands were met. “Look what you’ve made me do,” a tearful Knowles pleaded with viewers as he slaughtered his fifth ape, ”all you needed to do was give another fifty quid and I wouldn’t have had to do this! Fifty lousy quid!” Attempts by local wildlife rangers to storm Knowles’ jungle stronghold were repelled when he bombarded them with over ripe bananas. “They could have gone off at any time”, commented a witness. However, upon hearing that the total he had demanded had been met, an obviously relieved Knowles released his remaining hostages, threw down his weapons and descended from the tree house. “I’m so glad that’s over,” a blood-spattered Knowles told Titchmarsh over the live satellite link, as he was arrested and led away by local police. “I don’t think the public at home always realise just how emotionally exhausting for us these fundraisers really are – it’s heart-breaking when they don’t seem to grasp the enormity of the threat to our wildlife. You feel you haven’t done enough to raise their awareness when they fail to respond.”

Back in London, the programme’s co-host, camp comic Graham Norton, shrugged off viewers’ criticisms of Knowles’ actions, and the fact that the BBC continued to cut back to his orang-utan murder spree at regular intervals. “I think the problem is that some people have completely misunderstood the nature of this programme,” he said. “It isn’t just some boring fundraiser – it’s a literal fight for survival. The species’ with the lowest votes will be eliminated as the evening goes on. They will be made extinct! We’re trying to bring home to people that if they don’t give generously, these animals will vanish from the face of the earth.” Indeed, the programme was the culmination of a two week series, during which twelve ‘celebrities’ travelled to exotic locales, each championing the cause of a particular species facing extinction. During the live finale, viewers were invited to pledge money to save one of the twelve species, with the one receiving the least support being eliminated each round. The ring tailed lemurs were first to be eliminated, with the paltry five pounds sixty they had received being redistributed amongst the surviving species before the next round of pledging began. London Zoo’s lemurs were then tied up in a hessian sack and beaten to death with a brick by Avril Lavigne as she performed her latest single. Norton assured viewers that every surviving ring tailed lemur in the world would be hunted down and similarly eliminated. It was at this point that Knowles decided to take drastic action, realising that the orang-utans he was championing had only bee a few pounds ahead of the lemurs on the first round. Whilst his brave efforts ensured that the great apes reached the last four, they were, ultimately, in vain, as the ginger primates missed the cut on the penultimate round, narrowly losing out to the Nile crocodile. “It was heartbreaking for Nick,” remarked Alan Titchmarsh. “He was inconsolable when Will Young poured petrol over that orang-utan and set it on fire on stage in London.” The final round saw representatives of the two surviving species fight to the death in a specially constructed arena, with the winner taking all of the money pledged that night. “Sadly, it was a bit of an anticlimax,” concedes Graham Norton. “Elephant versus albatross was never going to be much of a contest, especially as the only albatross we could muster had a broken wing.”

Whilst proclaiming the event a success, BBC executives did admit in private that its credibility had been undermined somewhat by the relatively poor quality of the music acts at the live finale. “There’s no denying that many of them were a bit B-list,” an anonymous source said. “We were really hoping to see a drunken Lily Allen and Amy Winehouse bare knuckle fighting with the gorillas when they were eliminated, for instance, or Phil Collins killing and eating the giant turtles with a toasting fork, but all the big acts were like that were already signed up to T in the Park or Live Earth. It’s a pity, as the sight of the lead singer of Genesis drooling turtle juice as he stuffed his face would have had far more impact than Chesney Hawkes throwing up at the first bite.” However, the BBC believes that the controversy generated by the programme helped raise awareness of the issues at hand. “We haven’t had so many complaints about a natural history programme since John Craven gassed those badgers on Country File a couple of years ago in order to highlight the inhumane methods used by farmers to cull them,” claimed a spokesperson. “Don’t let’s forget that as a result of that they stopped gassing them. They use dogs and shotguns instead now. It’s far more traditional and humane.” Indeed, there is a growing belief that the relative failure of the subsequent Live Earth concerts to capture the public imagination was due to their failure to match the shock tactics of Saving Planet Earth. “What they should have done was have Al Gore kick the whole global event off by setting fire to a huge swathe of the Amazon jungle,” opined the BBC spokesperson. “Then followed it up with Madonna blowing up the Thames flood barrier and deluging London. If that didn’t raise awareness of global warming, I don’t know what would.” The BBC are also keen to point out that their Saving Planet Earth programme contributed to recycling. “We’d like to assure viewers that none of the species killed for the programme went to waste,” their spokesperson said. “All of the meat was cooked up by Jamie Oliver into delicious and healthy pies, which were distributed amongst London’s homeless.”