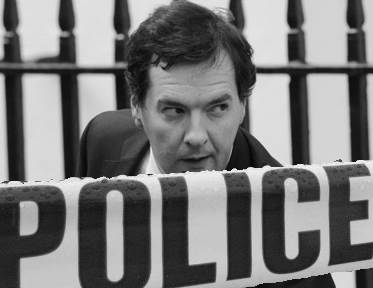 The government is claiming that new figures showing a huge drop in recorded crime is further vindication of its economic policies. “Austerity hasn’t just delivered an economic recovery but is also producing tangible social benefits,” crowed Chancellor ‘Gorgeous’ George Osborne, addressing a meeting of the Streatham Young Conservatives. “Despite the naysayers and woolly liberals decrying our cuts in public spending, claiming that they would result in chaos, deprivation and rising crime levels, the opposite has happened: by slashing expenditure on police and taking officers off of the streets, we’ve achieved a real reduction in offending rates!” According to the multi-millionaire Tory, the key to his success in reducing crime lies in his party’s recognition of the fact that policing isn’t the answer to fighting crime, but rather that it causes crime. “Everyone’s known for years now that the police have been inflating the crime statistics for years by committing fake crimes so as to justify their existence and inflated pay packets,” he told his baying audience. “But nobody has been brave enough to admit it, instead clinging to the outdated view that more police gives us greater security – only we’ve had the courage to challenge this received wisdom!”

He later qualified his comments, following criticism from several Chief Constables, stating that he didn’t believe that police officers were necessarily committing major crimes to inflate their statistics, just minor offences. “Obviously, the Chancellor isn’t saying that they are out there committing murders and sex offences,” a Treasury spokesperson told the press. “But everyone knows that they’re always out there stealing people’s phones and iPods – especially from black people under the guise of ‘stop and search’ -not to mention a fair bit of vandalism and housebreaking.” However, Tory backbencher Sir Reginald Herne-Boakes is more forthright on the subject, claiming that it is common knowledge that the police are regularly committing major crimes. “Look, it is no coincidence that under the last Labour government we had record numbers of officers on the beat at the same time as rising gun crime, violent crimes and sex offences,” he told the Daily Norks. “They aren’t even subtle about committing these crimes – just look at that fellow in Tottenham they gunned down a couple of years ago – not only did it boost the murders and gun crime statistics, but it also triggered those riots which put crime figures up across the board! All so that the blighters could justify more money and officers! I’m telling you, policing is the biggest racket in Britain today! I just thank God that Osborne has seen through it!”

Not everyone is convinced of Osborne’s claims. “This is clearly a case of British criminals underperforming, rather than being a result of the government’s discredited economic policies.” his Labour counterpart, Ed Balls, declared in the Commons. “Like so many of our industries, crime is suffering from a lack of investment, affecting opportunities for new criminal activity, thanks to this government’s disastrous economic policies.” According to the Shadow Chancellor the failure of Britain’s banks to lend money, despite massive injections of public money since the financial crash, lies at the root of the problem. “If the banks are hoarding money in their central vaults instead of lending it, then there will be no cash for blaggers to rob at local branches,” he claimed. “Bank robbery has traditionally been the cornerstone of British crime, without regular blaggings to finance other criminal endeavours, is it any wonder that crime rates are down?”

Others believe that the problem lies in the so-called ‘gentrification’ of crime in the UK. “It’s all about multi-million pound financial frauds these days, rather than good old fashioned blaggings,” wheezes seventy eight year old ex-East End villain and former EastEnders actor Charlie Prodd. “The fact is that these days a working class bloke like me just wouldn’t be able to get on the crime ‘ladder’.” The one-time enforcer and wheel man for a number of East End ‘firms’ in the sixties believes that with ‘entry-level’ crime now being mainly fraud or web-based, such opportunities to start a life of crime are being monopolised by the educated and middle classes. “Gone are the days when you could start off with a few street muggings – there’s literally no money in it these days with people carrying less cash on them,” opines Prodd, who played loveable local flasher Harry Tibbs in the popular BBC soap between 1999 and 2001. “Crime has become the preserve of the privileged few who can use their connections to get top jobs in banks and the like, where they can rake off millions at no personal risk. I mean, these public school educated city types can rip us off for billions with their dodgy financial schemes, rig the Libor rate and force small businesses into liquidation so as to seize their assets and all that happens is they get a bonus, but if some working class kid steals a bottle of water during a riot, they get six months inside.”

The government has responded by claiming that it is already addressing the problem of underperforming criminals, which it believes is an entirely separate issue from the latest fall in recorded crime. “Unlike the last Labour government – of which Mr Balls was a member – our response isn’t to import huge numbers of foreign criminals from Eastern Europe,” a spokesperson told the press. “Instead, the coalition government is working on introducing whole new kinds of criminality – the real problem here is that criminals haven’t kept up with changes in modern crime and remain stuck in the essentially Victorian criminal mindset of ‘old’ crimes like robbery, murder and larceny. We need to completely modernise our crime!” To this end, the spokesperson pointed out, Welfare and Pensions Secretary Ian Duncan Smith was busy creating whole new areas of criminal activity. “Being poor, claiming benefits, even just having a spare room – these are just some of the innovative new forms of criminality he’s already introduced,” the spokesperson enthused. “Those are just the start – believe me, he’s got many more up his sleeve!”