Mother of All Big Brothers 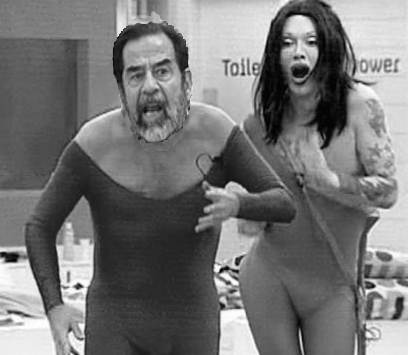 Channel Four’s most recent series of Celebrity Big Brother continues to attract criticism, despite having finally ended. Whilst earlier condemned for the racism suffered by Bollywood star and eventual winner Shilpa Shetty, the latest attacks have focused on the bizarre twists introduced during the programme’s final week, which saw the arrival in the Big Brother house of two notorious international terrorists: Saddam Hussein and Osama bin Laden. Saddam’s sudden introduction as a new ‘mystery housemate’, was undoubtedly the more shocking of the two entrances. Shouting “Surprise! Now this is the Mother of all Big Brothers!” the former Iraqi president suddenly sprang up through a trap door in the garden, as the other housemates were lying around the swimming pool. Doffing his trademark trilby to the ladies, the dapper dictator explained to the disbelieving housemates that his December execution in Baghdad had actually been faked, so as to keep his Big Brother appearance secret. “When they offered me the choice between this and hanging, I knew that I had a tough decision to make,” he told them. “I know a lot of people will be thinking that this is just a desperate attempt to get back into the limelight, but Big Brother was just too good an opportunity to miss. At last I have a chance to show people the real me – thanks to American propaganda, I’ve been greatly misrepresented!” The one-time Butcher of Baghdad had spent the previous fortnight covertly living in a foxhole in the garden, secretly observing the goings on in the house. However, not all the participants seemed to fully grasp who Saddam actually was, with the evicted Jade Goody’s idiot boyfriend Jack Tweed ordering a kebab and chips and asking whether his van was parked around the corner. Despite this early misunderstanding, Saddam quickly established himself as the life and soul of the Big Brother house, entertaining the other inmates with his hilarious tales of torture in pre-war Iraq, and his side-splitting mime impressions of his Kurdish villagers choking to death on poison gas. Sadly, this situation was not to last: within days Saddam was alternating furious tirades at Big Brother in the Diary Room, with pleas for a mercy killing. “Hang me, please,” he begged at one point. “Having to endure that bloody Cleo Rocos’ impressions is surely a crime against humanity! Even worse is that bird who flashes her tits for the papers constant farting – even I never subjected people to such abominable torture!”

Osama bin Laden, who had entered the house a few days before Saddam, after spending two weeks hiding in a kitchen cupboard, fared even worse than his fellow war criminal. Indeed, within hours of his arrival he sparked controversy by accusing US contestants Dirk Benedict and Jermaine Jackson of racism, after they denounced him as an ‘evil terrorist’ and attempted to lynch him with a bed sheet. “This is obviously anti-Arab racism,” he claimed in the Diary Room. “They’d never have treated me this way if I had been one of those nice white Irish Republican terrorists! Oh no! They’d have been buying me drinks, singing Irish songs and giving me lots of charitable donations for the ‘boys back home’!” Meanwhile, outside the house, bin Laden’s presence had resulted in a tense stand-off between US troops who had attempted to storm the building and arrest the Al Qaeda leader, and the programme’s security guards who had barred their way. “Short of a medical emergency, there’s no way a non-contestant is going to enter that house,” explained a spokesperson for producers Endemol. “Furthermore, unless he breaks any of the rules of Big Brother, or is evicted by public vote, there’s no way Osama’s leaving the house. Even then, he’s still got to fulfil his contractual obligation to face a baying mob, be interviewed by Davina McCall, bored to tears by Dermot O’Leary and subjected to incoherent sexual innuendo by Russell Brand. I’m afraid the US military are just going to have to wait their turn.” By the end of the week, it looked as if they wouldn’t have to wait much longer, as bin Laden found himself nominated for eviction by his fellow housemates. Also up for eviction was Saddam, following his attempt to gas Cleo Rocos, Jo O’Meara and Danielle Lloyd as they slept, using a rubber hose connected to the oven. “I am confident the British public will recognise the service I was trying to do them and spare me,” he defiantly told the Diary Room, before vehemently cursing British Gas for not supplying nerve gas to its domestic subscribers.

However, the programme’s makers had several surprise twists in store for the evictees. Instead of leaving the house to face an interview with Davina McCall, it was revealed to viewers that they would in fact be handcuffed and led to a gallows to be hanged live on TV by celebrity executioner Graham Norton. Finally, in a shock eviction night development, a horrified Saddam and bin Laden learned that it was to be a double eviction – and a double execution. The last words the pair heard as camp comedian Norton tripped the trapdoors beneath their feet was his catchphrase of “Oooh, penis!” Nevertheless, bin Laden was to have the last laugh, when Jack Tweed turned suicide bomber at his eviction. Having been indoctrinated by the terror chief, the dim-witted non-celeb’s homemade explosive device – comprising three well-shaken two litre coke bottles strapped to his waist – succeeded in splashing three members of the studio audience and making a nasty mess in his trousers.
Channel Four bosses have subsequently been forced to defend both the execution – for which they had special dispensation from the Home Office – and the inclusion in the programme of two notorious international war criminals. Denying press speculation that Saddam’s appearance was actually part of a deal with the Iraqi authorities to legally torture the deposed dictator, a spokesperson for the channel claimed that they he had simply been the obvious replacement for singer Leo Sayer, who had walked out of the series. “They’re both living on past glories and neither of them wash their own underpants! As for Osama, who better to replace Ken Russell than a bearded recluse with a history of making bizarre and highly personal movies in his own home?” he asked. “As for the hanging, what better way to simultaneously boost viewing figures and off-set the public ill will generated by the earlier Jade Goody-racism row?”