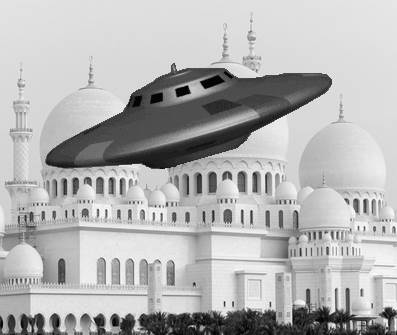 A UKIP prospective parliamentary candidates has sent shockwaves through Britain’s political landscape with his claims that the origins of Islamic extremism are literally other worldly. “Islam doesn’t just look and feel like an alien culture, it is an an alien culture – originating on a planet several light years away from our solar system,” Ken Trabant, who is contesting the Crapchester West seat for UKIP in the forthcoming general election, told an astonished crowd at a recent constituency party rally. “Believe me, the origins of this faith are entirely extra-terrestrial, with its adherents arriving in the UK via flying saucers, rather than through regular immigration channels. It’s the reason that they are ‘not like us’ – because they aren’t like us!” Trabant went on to explain to all thirteen attendees at the packed meeting that the alien Muslims planned to infiltrate British society, stealthily taking control of the country. “Just look around you – they’re suddenly everywhere! It wasn’t so long ago that they confined to the isolated colonies they’d set up in places like Bradford!” he alleged. “And who remembers them actually arriving in those places in the first place, eh? They just appeared! And, according to my researches, their first appearances always coincided with local UFO sightings!”

The UKIP candidate claims to be particularly worried about the threat posed by the growing number of mosques which are appearing in Britain’s towns and cities. “Like the Muslims themselves, their mosques just appear – can you actually remember one being built? Of course not! You just walk down a street one day and there one is,” he declared to his fellow party members. “The fact is that they land at night – they are actually the Space Muslims’ ships! It’s obvious really – just look at how alien their shape is, with all those pressure domes and rocket boosters disguised as minarets, not like a proper terrestrial Christian church!” However, the biggest threat, he contends, lies with the so-called ‘Mega Mosques’ which have started to appear. “These aren’t just regular spaceships, like the normal mosques,” said Trabant. “I’ve been told that these huge vessels are more like those giant robots in Transformers – given the right order they can rearrange themselves into giant Mullahs! Imagine the devastation if these giant Mullahs from space were to start stamping all over the towns and cities these ‘Mega Mosques’ are appearing in, shooting death rays from their eyes?”

Not satisfied with spinning terrifying images of giant Mullahs from space trampling over Britain’s cities, the UKIP man went on to claim that the alien Muslims were already engaged in a sinister programme of ‘converting’ unsuspecting earth people. “I’m warning you now – don’t ever feel tempted to attend one of those ‘open days’ they hold at their regular mosques,” he told the rally. “I know they come on all friendly and claim that these events are intended to reassure non-Muslims that they have nothing to fear from Islam, but that’s all bullshit! Enter one of their mosques and you’ll never be the same again!” According to Trabant, several people he has known have attended these ‘open days’ and emerged from the mosques completely changed. “I’ve known virulent anti-Muslim English Defence League supporters spend a couple of hours in one of those places and emerge glassy eyed, staring vacantly and eulogising Islam,” he claimed. “They come out praising it for its commitment to peaceful values and its strong moral standards! I’m not sure whether they’ve been replaced by replicants or just brainwashed in some way, but its clear that the alien bastards are trying to conquer by stealth! But if that doesn’t work, believe me, the giant space Mullahs will start stamping on our cities!”

Not surprisingly, Trabant’s allegations, reported by the Daily Norks, have been met with a mixture of ridicule and outrage, with the leading British Muslims, historians and theologians joining forces to point out that Islam has a well documented history going back two millennia, and hasn’t simply ‘just appeared’ out of nowhere. The UKIP candidate, however, has dismissed their criticisms, asserting that this entire ‘history’ has actually been fabricated by the space Muslims as part of their evil plans to subjugate the human race. “All of these people claiming that Islam is an established religion which has been around for centuries have clearly been brainwashed, or replaced, by the aliens during those mosque open days,” he told the newspaper, adding that Muslim infiltration of the media had also allowed them to use subliminal brainwashing techniques to plant false memories of Islam’s fake history in the minds of the wider population via TV, radio, newspapers, the web and books. “I know it sounds like an impossibly huge operation, but face it, if they can travel light years from their home planet to invade the earth, then brainwashing the entire human race would seem relatively simple to them!”

Trabant believes that the alien nature of the Muslims has been highlighted by the rise of Islamic State (IS) in Iraq and Syria. “They just came out of nowhere – nobody, not the Pentagon, not the CIA nor the Foreign Office, had foreseen their rise. Obviously, they couldn’t have, as they came from outer space,” he claimed in an interview with the Daily Norks. “How else can their military successes – they swept the entire US-backed Iraqi army aside – be explained other than through the use of advanced alien technologies?” Trabant argues that the rise of IS is part of a dual strategy being employed by the Muslims from space: conquest by force in less developed areas coupled with a policy of stealthy infiltration in those countries which might be better placed to resist military force. Whatever the tactics employed, he has no doubt what the ultimate aim of the aliens is: to enslave the human race. “Trust me, if one of those flying mosques lands in your town, then it’s only a matter of time before they start imposing their Sharia law on the streets,” he warned. “And there’s nothing more alien than that, with its subjugation of women and harsh punishments for minor crimes, is there? I mean, no normal British human would approve of that sort of thing, would they?” UKIP leader Nigel Farage has so far declined to comment on his candidate’s unusual views.