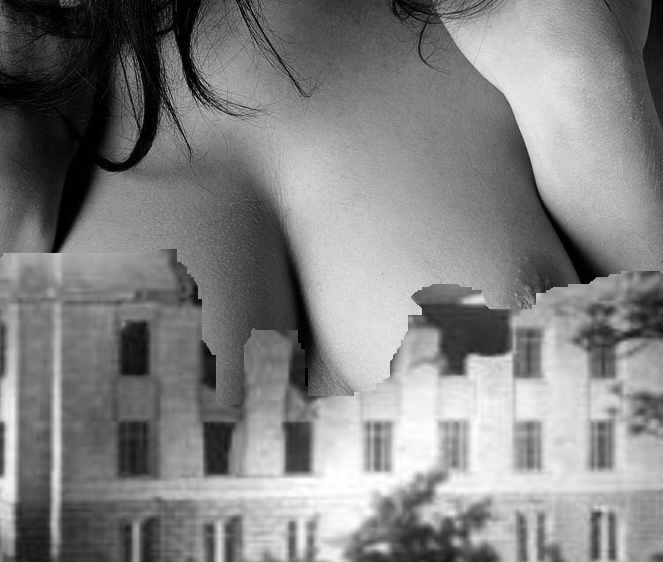 The authorities have moved swiftly to assuage fears that pneumatic model Jordan’s outsize breasts might have ‘gone rogue’. “Whilst these huge wallopies currently pose no threat to the public, if sighted, they should not, under any circumstances, be approached,” Home Secretary John Reid told a press conference. “They should only be tackled by expert handlers.” Worries that the breasts could have turned wild arose following press reports of the recent illness of Jordan’s husband, self-styled Australian singer Peter Andre. Despite statements both from the couple’s publicists and the hospital that had treated him, that Mr Andre had been suffering from a bout of meningitis, rumours were rife that he had actually been crushed by his spouse’s gigantic gazonkas during a frenzied sex session. “Even if that were the case, it still wouldn’t be evidence that Jordan’s titanic tits had turned vicious,” declared their spokesperson. “It could simply have been an accident – hundreds of people a year are injured in incidents involving outsize breasts according the Royal Society for the Prevention of Accidents. Not that Peter was crushed by them, obviously.” Nevertheless, experts have questioned the accident theory, pointing out that most accidents involving oversized knockers are self-inflicted – mainly black eyes resulting from the monster milkers ‘popping out’ during vigourous exercise. “Care must be taken that abnormally large lollos should be properly lashed and secured before their operator starts to jiggle about,” opines Professor Henry Nunger, a specialist in accident prevention strategies. “People just don’t realise the damage they can do when they start swinging around.” He agrees, though, that it would be highly unusual for anyone to receive crush injuries from giant breasts, even during vigourous love making. “Obviously, if the conventional so-called missionary position was adhered to, Mr Andre would have been on top, making such injuries impossible,” muses the Professor. “Of course, if they were employing one of those new-fangled techniques where the lady is on top bouncing up and down, there is a remote possibility of such injuries being incurred.” Whilst it is highly unusual for crush injuries to be inflicted by big blamps during sex, Nunger concedes that there have been cases of suffocation. “Yes, there was that time that Billy Bob Thornton fellow’s head reportedly got trapped between Angelina Jolie’s dirty pillows – I believe he’d turned blue before the fire service freed him,” he recalls. “We mustn’t forget Don Johnson either, and that time he was nearly suffocated when he got a mouthful of Melanie Griffiths’ tremblers as she descended on him.” Ultimately, Nunger feels that it is far more likely that Andre was the victim of an attack by his wife’s out of control bazooms. “If these things haven’t been trained properly, they can sometimes turn highly aggressive when mishandled,” he declares. “If they are allowed to run out of control, the results can be catastrophic!”

Indeed, according to the tabloids, after attacking Peter Andre, Jordan’s huge hogans went on a rampage through London, assaulting several people in the process. “I could see them jiggling up and down like crazy under her blouse as she came storming down the street,” thirty one year old shop worker Maisie Buttons, who suffered severe bruising when Jordan’s jalobies jumped out her in Covent Garden, told The Sun. “She clearly didn’t have them under proper control – it’s about time the Government forced people to have licences before they can own things like that! They could have had my out with one of their nips!” Freelance photographer Drew Johnson suffered severe concussion and a suspected fractured skull after his encounter with the rampant rack in Soho. “I was just trying to get a good cleavage shot when they leapt out at me,” he told the Daily Mirror. “They snatched my camera out of my hands and crushed it between them, before bouncing up and down on my head until I passed out!” There has also been much speculation that – in addition to assaulting several people – Jordan’s breasts might also have been the cause of the recent earthquake which devastated large parts of Kent. Indeed, several eye-witnesses claim to have seen the huge honkers bouncing across the Garden of England, setting off massive earth tremors and crushing all in their path. “I came round the corner and there they were, bouncing up and down,” says retired milkman Ron Hippler, who claims to have encountered the terrifying tremblers on a country road just outside Sevenoaks. “First the right one would fly up in the air and, just as it came crashing back down, the left one would go up! You could feel the earth moving with the repeated impacts – trees and telegraph poles were collapsing left, right and centre!” With the whamdanglers bearing down on him, Hippler desperately tried to put his car in to reverse, but succeeded only in stalling it. “I managed to leap clear just in time,” he claims. “A few seconds later and I would have been crushed to death as the left one came crashing down on my Nissan Micra!” Mr Hippler’s insurance company is currently refusing to pay out, claiming that his policy didn’t cover giant breast attacks.

The fearsome funsacks’ rampage has led to calls for stricter controls to be placed upon abnormally large breasts. “In the US, the California State authorities have already banned Lindsay Lohan from bringing her breasts across the state line unless they’re securely held in a sports bra, since that time their drunken bouncing nearly caused the San Andreas fault to open up,” observes Tory MP Reginald Plumply, whose Kent constituency was one of the hardest hit by Jordan’s destructive dubbies. “It’s about time the government did something similar here, with everything above a D-cup having to be in an underwired bra at all times – the police should be given powers to carry out spot checks.” Plumply is also proposing that breast implants be banned for all except specially licenced professional porn actors. “Arguably, they constitute ‘tools of the trade’ for such people,” he says. “But I really can’t see any justification for them otherwise – what possible use does the average woman have for a set of double G cup buffers? A good handful is all any self respecting man needs to get hold of.” Indeed, the backbencher has even suggested that women possessing such charms naturally, should be forced to undergo breast reduction surgery in the interests of public safety. Jordan’s rogue rib cushions, meanwhile, were finally captured by professional Big Breast Hunter Rog Rackham, the man who famously ambushed and wrestled glamour model Leilani’s gargantuan gazongas into submission after they attacked a teenager during a Doncaster supermarket opening. “They went down after a single shot from my dart gun, “ says rugged Rog, who tracked the tremendous tremblers for three days before discovering them quivering on the stage of a Dover lap dancing club. “Those fake ones are always the easiest to subdue. If you can get ‘em in the silicon implant, they go down like a sack of jelly. It’s just a case of securing them in a reinforced brassiere – the secret there is to warm you hands first, or maybe even use a table spoon.” The misbehaving melons are likely to undergo a rigourous retraining programme before any decision is made on whether or not they are to be reunited with their owner, or adopted by a foster family. Their fate could hang on whether or not the police decide to charge Jordan over the assaults and earthquake. No decision has yet been made.