Cult of the Christmas Cock 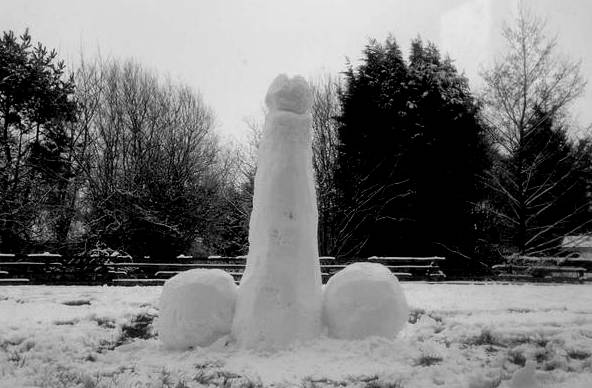 Juvenile prank or symbol of a sinister new religious movement? The overnight appearance of giant snow penises in snowbound front gardens in Scotland has prompted speculation that the mysterious Cult of the Christmas Cock could be growing in strength in the UK. “Obviously, when I pulled back the curtains that first morning and saw it there in my front garden, standing erect, I assumed it was some kind of prank, probably carried out by drunken students,” says East Kilbride resident Donald McSweary, who awoke last week to find a six foot tall penis made of snow in his front garden. “The first thing I did was to go out and beat it down with a shovel. But the next morning it was back, bigger than ever and with two huge balls at its base!” This time McSweary noticed the network of footprints and other marks in the snow around the frosty erection. “There were too many footprints for them just have been made by whoever put up the thing,” he says. “It looked like a whole horde of them had come into the garden and knelt down in front of it – as if they were worshipping it!” The householder determined to get to the bottom of the mystery by allowing the frozen penis to stand and watch what happened that night from the safety of his front bedroom. However, his ambitions were thwarted by the police. “They came round and insisted I took it down,” he explains. “They claimed the old biddy from across the road had complained – she claimed that I’d put it up myself, modelling it on my own member, as some weird way of propositioning her!” Forced to comply under threat of prosecution, McSweary was disappointed that, this time, the snowy cock didn’t reappear overnight.

This isn’t the first time that the mysterious wintry erections have appeared. According to Franklin Bember of Weird Shit magazine, McSweary’s experience was typical. “These things just appear, without apparent rhyme or reason and invariably in people’s gardens rather than, say, public parks, and always before Christmas,” the self-styled paranormal investigator muses. “They also vanish quickly – usually destroyed by householders or the authorities.” Indeed, Bember suspects that this could be indicative of a high-level cover-up of the Christmas cock phenomena. “One man in Dumfries reported that a huge erection which had appeared in his garden following the first snowfall in November, had been destroyed by a group of policemen, who beat it flat with their truncheons,” he says. “He said that they seemed very concerned that as few people as possible should see it and, when he refused to destroy it himself, they threatened to arrest him for public indecency!” But why would the authorities be so worried over what appears to be simply a puerile prank? “That’s the point – that these things aren’t being put up by pranksters,” Bember claims. “As far as I can tell nobody has ever seen one going up! However, the number of footprints which always surround the penises indicates a large number of conspirators are involved – I’m convinced that they’re the product of some kind of sinister cult the authorities are trying to suppress, for fear that if it spreads it will undermine civilisation as we know it!”

However, if the authorities really are trying to stamp out the so called ‘Christmas Cock’ phenomena then they have so far failed, as it has already spread South of the border to England. “They first started appearing a couple of years ago, during all that pre-Christmas snow,” says Bember. “In fact, I’ve heard stories from people who were trapped in their cars by the blizzards that they found roads blocked by giant snow cocks!” Not even the subsequent lack of heavy snowfall in England has been enough to stop the spread of the Christmas Cock, with it appearing with increasing frequency in the form of a crudely drawn cock and balls, often adorned with a Christmas bow. “Sometimes it is painted on walls in the form of graffiti, or sometimes just chalked on the pavement,” Bember observes. “I once even found it drawn in the frost on the bonnet of my car!” As with the snow penises, this version of the ‘Christmas Cock’ only appears in the run-up to Yuletide, in November and December, vanishing again once January arrives.

But exactly what is this ‘Cult of the Christmas Cock’ and does it really represent a serious threat to Britain’s social fabric? Folklore expert Eugene Jingler suspects that it is some kind of fertility cult. “Much of what we accept today as festive traditions have their origins in ancient fertility rites,” he opines. “In ancient times these would be performed at midwinter in order to try and ensure the return of Spring, good weather and abundant crops. The adoption of a gigantic cock and balls as a symbol for such a cult would seem only natural.” Jingler suspects that climate change, bringing with it longer and harder winters, has encouraged the growth of the new cult in the UK. “Clearly, the superstitious denizens of these Isles fear that these bad Winters are in danger of becoming permanent,” he chuckles. “So they are appealing to the ‘Great God Cock’ to hold back the snows!” Whilst Jingler’s theory that the cult could be linked to fertility rites might be correct, these rites, it seems, have little to do with warding off the Winter. “It’s all about the ‘Christmas Cock’, isn’t it? You know, the mystic entity which can put more lead in your pencil at Christmas,” explains twenty two year old Ollie Frick, a self-confessed member of the ‘Cult of the Christmas Cock’. “I mean, Christmas is the only time of year when most of us ordinary blokes have a chance of pulling any fit birds – mainly at office parties, when they’re so drunk they’ll agree to a quick grope behind the photocopier with just about anyone!”

Acolytes like Frick believe that by invoking the ‘Christmas Cock’ through the worship of effigies, they will be temporarily imbued with its potency for the festive period. “Believe me, it’s brilliant,” he enthuses. “No matter how drunk you are, once the spirit of the ‘Cock’ is in your loins, you are guaranteed an erection like no other! Your performance is superhuman! Just ask any woman and they’ll tell you how much they enjoy some ‘Christmas Cock’!” When questioned on the latter point, most young women opined that if the ‘Christmas Cock’ really could invigorate men’s sexual performance over the festive period, it would be a huge improvement over the usual flaccid fumblings they usually have to endure throughout December. Whilst the movement seems a harmless enough sexual fantasy for under-sexed young men, others fear it is more sinister. “It’s a filthy perversion, an unspeakable blasphemy which seeks to replace Our Lord Jesus Christ with a giant penis,” declares the Reverend Angus Minger, who claims that cultists have defaced his church in Dorking, carving an effigy of the ‘Christmas Cock’ into a pew. “They mock us, replacing the idea of the divine power of Christ saving all of humanity with the concept of a divine member saving their libidos and enabling their self-gratification! They even speak of this ‘Christmas Cock’ facilitating a ‘Second Coming’! Blasphemy!”