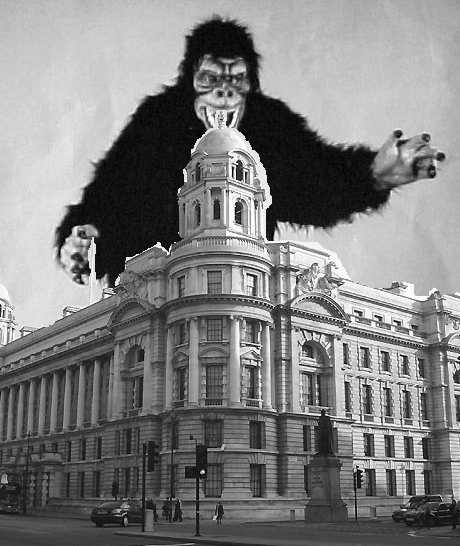 With monster attacks on the increase, the UK government is coming under increasing pressure to establish a national ‘Monster Hot Line’ which members of the public can use to report their sightings of marauding creatures. “When you dial ‘999’ there’s no option for monsters, just police, ambulance or fire,” contends Arthur Titmann, one of Britain’s leading monster hunters and editor of the Southern Counties Monster Spotter’s Quarterly Digest. “Confronted by an Abominable Snowman or giant Gila Monster, the average man in the street wouldn’t have a clue which emergency service was required, especially if the creature wasn’t actually committing any criminal offence, injuring anyone or causing general mayhem at the time! Clearly what we need is a single, easy to remember, number which can be called simply to report the sighting – a bit like a call centre. You know the sort of thing: ‘If you have just seen a living dinosaur, press one; if it was an ancient Egyptian mummy, press two;’ and so on! If you don’t know exactly what it was you saw, you could press nine, say, to get in touch with an operator to take a description!” Titmann believes that such a service is essential if the authorities are to take effective action to prevent incidents such as the monster attack which destroyed the Buncefield oil storage depot in Hertfordshire. Eyewitnesses to this incident wholeheartedly agree with him. “If there had been some number I could have called to report what I saw just before the explosion, perhaps the authorities could have done something to head it off,” muses local resident Ronald Crocker, who claims that he glanced out of his window early on the morning of the explosion to see a giant ape approaching the oil facility. “He was at least fifty feet tall and appeared to be carrying something – possibly an empty petrol can. Despite roaring and beating his chest, nobody came to the gates to let him in – he was getting really pissed off!” With no clear idea of who to contact about this bizarre sight, Mr Crocker simply decided to go back to bed. “Well, it was Sunday morning and it wasn’t as if he was actually committing any crime was he? For all I knew, he could have worked there!” However, within fifteen minutes of this decision, sixty-seven year old Crocker found himself flung from his bed by a huge explosion: “All the doors and windows were smashed and the roof blown off! There were huge flames and thick black smoke billowing out of the depot!”

Instead of establishing a ‘Hot Line’, the authorities’ response to the Buncefield incident was a blanket denial of any simian presence, giant or otherwise, at the depot. “We’re well aware that at least one local resident, obviously concussed and confused from the explosion, has claimed that a large monkey was responsible, but I can categorically state that there is no physical evidence of any such creature having been responsible for the incident,” Chief Inspector Tony Tallow of Hertfordshire Constabulary told The Sleaze. He also rubbished claims that the beast had moved on from Buncefield to devastate the town centre of nearby Hemel Mempstead. “For God’s sake, how could anyone tell the difference? It’s always looked like that!” Nevertheless, local residents are convinced an official cover-up is afoot. “Not long after the explosion one of my neighbours found a huge footprint in his back garden, apparently made by a gigantic hominid,” claims van driver Norbert Spanzer, who lives a few miles from the depot. ” When they pointed it out to the police, they immediately ‘evacuated’ them from the house and sealed off the whole street!” According to Spanzer the authorities moved quickly to cover up any further evidence. “Later on, this group of kids at the community centre where we were ‘evacuated’ to, reckoned that they’d seen teams of soldiers with shovels filling in giant footprints in fields near the depot,” asserts the twenty three year old Fortean Times subscriber. “Obviously, the authorities feared that there would be mass panic if the public knew that a giant gorilla was rampaging around the countryside!” However, despite these measures, panic did rapidly grip Southern England, as rumours spread that the giant ape was heading toward the Thames Valley under cover of the huge cloud of black smoke emanating from the burning depot. “From Bracknell to Eastleigh, people were boarding up their windows and hiding in cellars, as the cloud – and the ape – approached,” claims Titmann. “If only they’d followed my advice and had a ‘Monster Hot Line’ in place, not only would the powers that be have been able to more accurately track the ape’s progress, but they could have included a recorded message reassuring callers that the ape’s rampage was being carefully managed. According to my sources, government scientists were luring him toward Southampton with a giant banana. Once there, he was tranquillised and put aboard a ship bound for Africa.” The only exception to this panic was in Basingstoke, where huge banners were put up welcoming the arrival of the giant ape. “Look, the last time we had a monster here was when Chicken Kong ran amok in the old bus station back in 1977, scratching the paint work on one bus and tearing the upholstery on another,” explains the Borough’s mayor Tom Milt. “You don’t know how discouraging it is for a town to only ever be targeted by fourth-rate grade-Z monsters. If we could just establish Basingstoke as a centre for big-name monsters to devastate, it would really put us on the map! Face it, if King Kong trashed the Festival Place shopping centre, there’s no way anybody would dare call us ‘Boringstoke’ again!”

Despite the government’s refusal to acknowledge the reality of monster attacks on the British Isles, Titmann has vowed to continue his campaign for the establishment of proper emergency procedures for dealing with these incidents. “The government might want to bury their heads in the sand, but monster attacks are definitely on the increase,” he declares. “They can’t just keep covering them up. Do they honestly think that people really believe all that chaos last summer on the underground was cause by suicide bombers? We have eyewitness reports that the carnage was actually caused by a rampant werewolf! If that wasn’t the case, then why were the police using silver bullets when they later shot that ‘terrorist’ suspect?” Titmann believes that such cover ups will have serious consequences further down the line. “Just look at the US, in trying to hide the truth of that giant ape attack on the World Trade Centre, they came up with that ludicrous story about hijacked airliners, then had to follow it through with the whole ‘War on Terror’ nonsense,” he contends. “Mind you, I can understand their reasoning: giant gorilla attacks or crazed hijackers on suicide missions – which is more likely to cause widespread panic? I know which one I find the more terrifying prospect!” Titmann can offer no explanation for the recent upsurge in monster attacks, although he speculates that it could be due to global warming. “Perhaps the increase in temperatures at the poles has brought them out of hibernation. Or maybe over-fishing is driving some of them out of their natural deep sea habitats in search of new food supplies,” he muses. “The bottom line is that, whatever the reasons, the monsters are coming to get us all! Never mind that the authorities claim it is terrorists, or bird flu or natural disasters – we know the truth! Be afraid, be very afraid!”