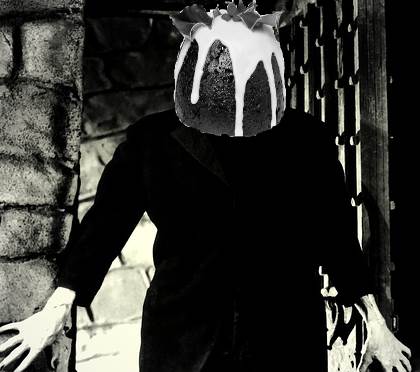 Why does a quiet English village live in fear of Christmas? How is the property known locally as ‘Castle Christmastein’ connected to a series of violent seasonally-themed murders? A casual visitor to the apparently sleepy Somerset village of Little Dongler in December could be forgiven for thinking that that it was, in fact, the most Christmas-obsessed village in Britain, with every house festooned with lights and every garden packed full of inflatable Santas and illuminated reindeer. Decorations also hang from every street lamp, cover the local post box and the village green is dominated by the largest Christmas tree outside of Trafalgar Square, its branches weighed down with lights and other decorations. Beneath the tinsel, however, local residents live in a state of terror throughout the festive season. “I remember the good old days, when hardly anybody bothered with those bloody external decorations – people just had an artificial tree and a few bits of tinsel up in their living rooms,” seventy four year old retired sub-postmistress and spinster of the parish Edna Crimple told The Sleaze. “But then the murders started and we all realised the only defence was to cover our houses in all that Christmas crap!”

The first killing occurred five years ago, when local curmudgeon Walter Burncock was found brutally slain in his living room, apparently beaten to death with a Christmas tree. “It happened the day after the old sod had cut down the village Christmas tree, which he reckoned was blocking the light from his front room,” recalled Miss Crimple. “It hadn’t been of course – it was the scrawniest specimen of a tree the tight wads on the parish council could find – but that was old Walter for you. Anyway, he’d obviously enraged his killer, who had apparently smashed in his back door and wrecked the place in the course of an extremely violent assault against the old bugger.” The only clues to the killer’s identity were several smears of cream and several raisins found in the victim’s house. “Mick Prickton, who found him, reckoned that the place smelt as if someone had been cooking a Christmas pudding in there,” said Crimple. “But the funny thing was that there wasn’t a single Christmas pudding in the house, cooked or uncooked. Walter couldn’t stand the bloody things.” In the absence of any real evidence, the police investigation quickly petered out, with the general consensus being that the murder was the random act of an itinerant maniac. But within a few weeks, Little Dongler was to be rocked by further killings.

“It was on Christmas Eve that the Frocktons were found dead. It was quite a shock – old Walter had only been dead since the beginning of December, then there was a double slaying, or should I say ‘sleighing’?” asks the retired sub-postmistress. “Both Fred and Dorothy Frockton were apparently stabbed to death with a set of reindeer antlers and their bodies cut up using the blades from a sleigh. The dismembered bits were suspended from a tree in their garden, like macabre decorations!” Many residents immediately saw a connection with the Burncock murder – whilst old Walter had defiled Christmas by cutting down the village tree, so the Frocktons were prominent Christmas ‘refuseniks’, who refused to put up any decorations and celebrated the pagan Winter solstice instead of the birth of Christ. “It seemed bloody obvious,” muses Crimple. “The murders were all Christmas themed and the victims openly anti-Christmas. We all said at the time that there was only one real suspect – that nutter from ‘Castle Christmastein’, but he had an alibi and the police wouldn’t pursue that line of investigation.” Once again, the assailant left few clues at the scene, other than a brandy soaked sprig of holly, leaving the police baffled.

The occupant of the so-called ‘Castle Christmastein’ – actually a shabby former council bungalow sited on a rise just outside the village – the self-styled ‘Baron Christmastein’, once again became the prime suspect for the villagers when the community was hit by a further wave of murders the following Christmas. “His real name is Chris Stein – he was a bit of a minor celebrity a few years ago when was featured in a Channel Five TV show about Christmas obsessives,” explains Crimple. “He’s been celebrating Christmas every day for the past fifteen years. He has permanent decorations up both inside and outside his house all year round and eats three hundred and sixty five Christmas dinners a year – three hundred and sixty six on leap years. He bloody loves the season, won’t hear a word said against it – so when there was another spate of Christmas killings, he seemed the obvious suspect.” Indeed, that Christmas saw a further four deaths in the village. “Mary Wonks was pelted to death with frozen sprouts in her back garden after she’d declared that she wasn’t going to have a traditional Christmas dinner that year, George and Francine Roopely were drowned in a bath full of brandy butter after cancelling their Christmas party and Terry Higlond was suffocated with wrapping paper after saying that he wasn’t bothering with presents that Christmas,” Crimple says. “Who else other than a Christmas obsessive would either see those sorts of things as motive for murder, or use such methods of murder? But the police just weren’t interested, repeating that he had alibis for all the killings.” Consequently, a group of angry villagers marched on ‘Castle Christmastein’, intent upon meting out their own kind of justice. “Of course, the police intervened,” sighed Crimple. “So everyone decided that the only way to defend ourselves without being arrested was to become insanely pro-Christmas every December.”

With the village smothered in Christmas paraphernalia, subsequent years saw a sharp decline in the number of seasonal slayings. “The only victims tended to be newcomers to the village, who didn’t take the whole Christmas curse business seriously,” recalled Crimple. “Like that young couple who refused put up any external lights: she was found tied to their Christmas tree with a string of cheap fairy lights which had electrocuted her when switched on, whilst he was discovered tied to the kitchen table, choked to death after being force fed mince pies.” But it was attempt on the life of an established local last Christmas which finally yielded some solid clues as to the killer’s identity. “There was an unsuccessful arson attack on Dickie Boozlum’s house – he’d been rash enough to burn his wife’s unopened presents after she walked out on him – a few days before Christmas,” Crimple told The Sleaze. “But this time someone saw the attacker. Young Pete Jimm was coming back from the pub when he claims to have seen a figure outside Dickie’s house. Bizarrely, he reckoned the arsonist took off his head, set it alight and threw it through Dickie’s front window before walking away, headless! Even stranger, he said the head looked like a Christmas pudding!”

Naturally, Jimm’s claims were dismissed as drunken ramblings – except that the source of the fire was found to be a brandy soaked burning Christmas pudding, as big as a man’s head, thrown through the window. “The next night the killer came back, breaking into Boozlum’s house, but this time Dickie was waiting for the bugger, armed with his shotgun. He gave him both barrels, blowing half his head off,” enthused Edna Crimple. “Incredibly, the bugger just got up and staggered off! According to Dickie, he glimpsed the thing in the muzzle flash before the shells hit home – he described it as looking like a Christmas pudding, with cream instead of hair and sprigs of holly forming a crude facsimile of facial features! Indeed, instead of skull and brains, there was fruit and cream spattered all over the wall behind where he’d shot the bugger!” Boozlum followed the headless creature, tracking it to ‘Castle Christmastein’. “He told us that, peering through the kitchen window, he’d seen ‘Baron Christmastein’ mix a new head for it in a mixing bowl, using mixed fruit and breadcrumbs, before baking it an oven. When it was done, the creature put the new head onto its shoulders,” she claimed. “Dickie said the whole thing was made from Christmas foodstuffs – Yule logs for limbs, for instance – which Christmastein had somehow assembled and animated to life! Clearly, he had created this Christmastein Monster in order to carry out his killings for him, whilst he established an alibi! Needless to say, the police dismissed it all again, saying that Dickie was still traumatised after the arson attack and had dreamed the whole thing! But we know better – this year we’ll be ready for the monster: armed with spoons, we’ll eat the bastard!” So, next time you pass through a village lit up with Christmas lights on every house, just remember: they might not be gripped by the spirit of Christmas, but rather living in fear of the ‘Christmastein Monster’!