A Ghost Story For Christmas 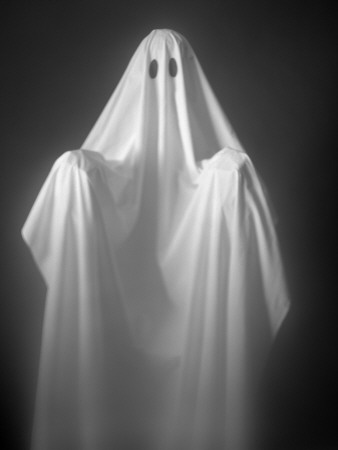 “He awoke in the night to feel his member being gently rubbed, still drowsy, he assumed he was merely sleep wanking, until, with a start, he realised that both of his hands were above the bedclothes! The shocked fellow immediately threw back the sheets to reveal nothing but his erect penis!” explained the Reverend MacLength, as we huddled around the fire, that dark and freezing Christmas Eve. “Despite an extensive search of the room, which was securely locked from the inside, he could find no trace of his assailant. The next morning he made discreet enquiries of the curate and housekeeper, but both denied having pulled his plonker as a nocturnal prank!” Stranded at a lonely Bracknell bus stop awaiting the delayed last night bus, I had found myself in the company of the gaunt clergyman, who, unbidden, had started to tell me what he claimed was the true, but extraordinary, tale of the singular experiences of his acquaintance Edward Cockmeister. As we huddled around a blazing rubbish bin for warmth, MacLength related how Cockmeister, a young academic, had been brought to the Old Rectory in Fulchester by reports of strange occurrences in the choir stalls of the cathedral, only to find himself the subject of a spectral sexual assault on his very first night there. “For several weeks there had been reports of choir boys running shrieking from the stalls, claiming they felt something brushing against their buttocks as they sang,” said MacLength, as he threw another empty Burger King carton on the fire, the brief flaring from its grease illuminating his face in a sinister glow. “Then there were the tales from the vestry, with several of the choristers saying they felt as if they were being watched as they got changed.” Despite a thorough search, no intruders or peepholes were discovered. But the strange occurrences continued, culminating in a twelve year old soprano fleeing the cathedral, complaining that whilst collecting the hymn books, an invisible assailant had bent him across the pews, lifted his cassock and thoroughly spanked his bottom. “The red marks were there for everyone to see, but no attacker was to be found,” the reverend revealed. “With the entire choir refusing even to enter the cathedral again until the issue was resolved, the Christmas Eucharist was under threat of cancellation. The ecclesiastical authorities had no choice but to call in expert assistance.” So it was that Cockmeister, an expert on such phenomena, found himself in Fulchester shortly before Christmas. “Upon his arrival, he was of the opinion that the gongs on at the cathedral were nothing more than a series of elaborate pranks, but his experiences in the Rectory, where he was being put up, soon made him question his beliefs,” chuckled MacLength. “He decided that he’d resolve the matter by spending the next night alone in the stalls and attempt to record any strange occurrences.”

As the chill wind whistled through the cracked glass of the bus shelter, MacLength told of how young Edward Cockmeister had set up his equipment in the choir stalls of the great cathedral, its cavernous depths illuminated by only a few candles, before being locked into the great building for the night. “If any thing moved in the stalls that night, his infrared cameras and microphones would record it,” MacLength told the band of weary travellers. “Settling himself down in the back row of the stalls, he prepared himself for a long, lonely night. When, after several hours of his vigil, nothing had stirred, he found himself drifting off to sleep.” However, according to MacLength, the academic found himself troubled by strange dreams in which he imagined himself a child, being pursued by a black clad man who finally caught him and put Cockmeister across his knee before thrashing his bare buttocks with a belt. In another, the academic found himself naked, being photographed by the mysterious man in black, forced to assume a series of humiliating poses with items of fruit. A final scenario saw the man in black stripping naked, before prising up some floorboards to reveal a stash of magazines he then forced Cockmeister to read – all featured pictures of young boys striking the same poses the academic himself had assumed in the previous dream – before the man slapped him around the face with his penis. At the end of each dream, the man in black would put his fingers to his lips, indicating his unwilling acolyte should remain silent about their bizarre activities. “He was awoken from his nightmares with a start, feeling himself being thrown forward across the back of the preceding row of the stalls,” said MacLength, eyes gleaming in the light reflected from a burning kebab wrapper. “Horrified, he felt his trousers and underwear being pulled down, a chill wind creeping between his buttocks as he felt the ghostly, yet strangely firm, presence of a male member forcing its way up his jacksie!”

With a frantic flailing of his limbs, the young academic managed to break free of his unseen attacker, and tried to run for the cathedral’s main doors, but fell, tripped by his trousers and pants which remained tangled around his ankles. “He could feel the unearthly and evil presence of the spectral intruder close behind him in the dark, its cold fingers brushing his thighs,” enthused MacLength. “With a cry of terror he kicked his trousers and underpants aside and bolted for the doors, forgetting they had been locked from the outside! Terrified, he hammered with both hands on the great doors, crying for help, all the while hearing the approach of the invisible assailant!” Miraculously, his cries for help were heard by the verger, who unlocked the doors. “Naked from the waist down, he burst screaming from the cathedral and fled down the steps,” said MacLength. “He was found several hours later, hiding behind a gravestone, a gibbering wreck!” But Cockmeister’s strange story didn’t end there, taken back to the Old Rectory by the verger, he described his dreams and ordeal to the curate. “His descriptions of the man in black stirred some dim memory in the curate. A search of the local newspaper’s online archive yielded the result he was looking for – the story of a previous Dean of the cathedral who was found hanged from the bell ropes after complaints of molestation from the choirboys,” MacLength explained. “When Cockmeister was shown a picture of the late Dean he was thrown into a fit of fear, screaming and pointing at it! Recalling the details of the academic’s dreams, the curate rushed to the cathedral and tore up the floor boards of the choir stalls. Beneath them lay a huge stash of child pornography!” According to the cleric, the filth was removed and sprinkled with Holy water before being burned. With their destruction, the strange disturbances ceased. “Clearly, it was the existence of his wank mag collection which drew his evil spirit back there,” concluded MacLength. “As for poor, Cockmeister, he remains a mental wreck, permanently confined to a care home!” I laughed nervously at his tale. “But surely such things cannot be true, can they?” I asked of the clergyman. “What of the Dean’s spirit, was it sent to purgatory, or could it return to wreak more havoc?” As I spoke, I turned away from MacLength, peering into the darkness in hope of spotting the bus. “I was merely exiled from the cathedral, doomed to wander aimlessly, attempting to sate my perverted desires,” I heard him say from behind me, as I felt myself pushed to the ground and my trousers pulled down. Terrified, I tried to scream as I felt his icy fingers begin to spread my buttocks, but darkness engulfed me. I awoke to find myself sprawled on the cold pavement, alone. The fire was dead and of MacLength there was no sign. I hastily pulled my trousers up as I saw the lights of the approaching bus and told myself as I boarded, my buttocks still numb, that it had all been a dream. Such things couldn’t be true, could they?