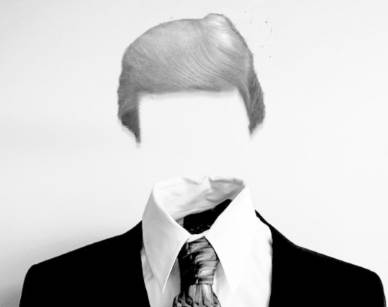 As Presidential candidate Donald Trump’s campaign for the White House appears to flounder, there have been astonishing claims that his bid for power has been sabotaged by an invisible man. “I know it sounds crazy, but it is absolutely true,” key Trump aide Kenny Strock told top supermarket tabloid the Weekly World Shopper. “All this stuff that Donald is being blamed for – it’s actually this invisible bastard!” According to Strock, who is in charge of leafleting in Wichita for the Trump campaign, all of the recent claims of Trump groping women are down to the mysterious invisible saboteur. “Every time Donald goes near an attractive woman, this invisible guy is there and starts feeling them up,” he explains. “Obviously, as the only person these women can see is Mr Trump, they slap him around the face and run off to the press alleging that he’s some kind of sex offender!” The campaign of sabotage has gone beyond groping women, with the invisible irritant also turning up during TV and press engagements, putting Trump off of his stride by whispering damaging words into Trump’s ear. “Every time Donald says something crazy, like Hillary being on performance enhancing drugs, or building walls along the Mexican border, it’s down to this invisible guy whispering the stuff to him,” Strock insists. “Everyone knows that when you’ve got someone talking shit in your ear, you just end up getting so confused you start repeating it out loud yourself.”

Incredibly, Strock claims to know the identity of Trump’s invisible tormentor, naming him as Dr Daniel Westin. “He was a research scientist at a facility owned by one of Mr Trump’s companies,” says Strock. “He was working on a defence contract to produce improved stealth technology for the US military, when he stumbled across the secret of invisibility. Unfortunately, this coincided with the company going bust and him losing his job. Blaming Mr Trump for his change in circumstances, he vanished, taking the invisibility secrets with him. Since then the crazed bastard has been trying to extract some kind of twisted vengeance by disrupting Donald’s life in this way!” Whilst most of Strock’s wild claims have been dismissed by both political commentators and Trump’s opponents, at least one concedes that Dr Westin and the invisibility research did actually exist. “It’s true that Westin was involved in this type of research for part of Trump’s empire and that he vanished, but the project wasn’t for the military,” claims Herman Beaudine, political correspondent of the New York Pigeon Fanciers’ Gazette. “The fact is that it was being carried out on behalf of Donald Trump himself.”

According to Beaudine, it was rumoured at the time that Trump wanted to develop the power of invisibility so that he could grope women with impunity. “It was allegedly just one of several groping technologies being developed, including a highly sophisticated mechanical arm that would have allowed ‘remote groping’ of women by the billionaire,” he says. “It would have provided sensory feedback, so that he would be able to ‘feel ‘the buttocks or breasts he was remotely touching up.” Trump, however, was alleged to have preferred the invisibility option. “For one thing, he preferred the idea of being able to directly grope women himself, rather than doing it by proxy,” the journalist muses. “Moreover, being invisible would have allowed him to go into Latino or Black districts and shout racial abuse with impunity. Of course this is all just rumour, there’s no hard evidence that he ever expressed any of these ideas.” Nevertheless, some reports Beaudine has seen claim that Westin and his team not only succeeded in developing the invisibility technology, but actually tested it on Trump himself. “Apparently it was partially successful,” he explains. “Whilst it rendered organic material invisible, Trump’s hairpiece is entirely synthetic, so they ended up with this disembodied bad wig floating around the lab, as he refused to take it off.”

Beaudine also contests Strock’s account of Westin’s disappearance. “Whilst the company he was working for did, apparently, go bust, as do many of Trump’s enterprises, Westin had left some time before that,” he says. “It is said that he was fired when he admitted that he had once voted Democrat and thought that beauty pageants were demeaning to women. Before he left, he succeeded in destroying enough of his papers and research materials that Trump’s scientists have subsequently been unable to replicate the invisibility experiment.” Rumours abound that Westin found himself unable to find any other scientific research work after finding that he had been ‘blacklisted’ by his former employers. “Since then, he seems to have disappeared,” notes Beaudine. “But probably due to poverty rather than an invisibility serum. Indeed, there have been a few reported sightings of him at soup kitchens, or living on the street, a hopeless alcoholic.”

Strock, for his part, stands by his original claims, telling the The Weekly World Shopper that the invisible Westin has been stepping up his campaign of terror against Trump. “Not satisfied with the groping and the whispering campaign, of late he’s been trying to embarrass Donald by standing next to him and breaking wind, so that everyone thinks that Mr Trump is flatulent,” he alleges. “All through that second Presidential debate he was letting rip ‘silent but deadly’ farts at Hillary Clinton – that ‘s why she was barely able to walk when she left the stage, having to be helped to her car, the stench was so overpowering.” Westin has also infiltrated social occasions, some even at Trump Mansion, and farted invisibly. “It’s terrible, his wind is just so noxious – probably a side effect of the invisibility – people are left green and gagging,” Strock reveals. “Of course, everyone is left thinking that not only does Donald have a severe gastric disorder, but that he also has no social graces farting whilst people are eating and not even acknowledging it, let alone apologising!” In the most recent incident, Westin apparently defecated in the Trump’s living room. “The stench was awful, but they just couldn’t find the source as the turd was invisible – they searched high and low,” recalls Strock. “Eventually it was found when Mrs Trump slipped over on it, twisting her ankle badly. Really, this can’t go on – the Trump’s have been reduced to nervous wrecks, not to mention social outcasts, by this business!” Further doubt has been cast on Strock’s claims by top scientist Obadiah Arnold, Professor of Physics at the Wisconsin Institute of Technology. “Not only are there several insurmountable barriers to rendering any living being truly invisible, but it is my professional judgement that any turd an invisible man laid would become visible as soon as it exited his body,” he told Scientific Yankee. “So clearly, Mr Strock’s story is utterly ridiculous.”