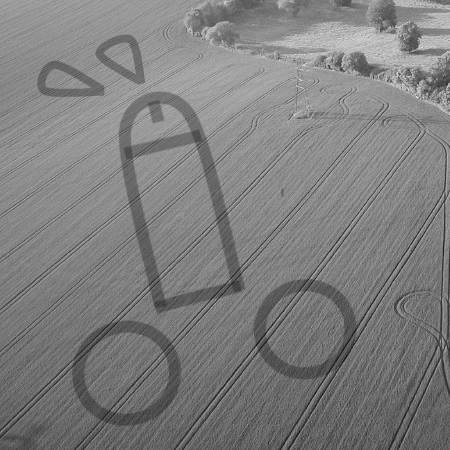 Do a series of erotic crop circles hold the key to curing such common medical problems as erectile dysfunction and premature ejaculation? Why are technologically advanced aliens travelling light years across the galaxy simply to wank off an old age pensioner on Britain’s south coast? Fifty four year old Warminster-based UFO investigator Charlie Thrummock has made the startling claim that the earth is regularly being visited by a race of extraterrestrial sex-therapists. “As soon as I saw that huge cock and balls in a field of maize near Westbury, my suspicions were raised,” says the retired electrician, who is currently on police bail after being caught one night standing in the middle of a corn field, trousers around his ankles, waving his flaccid penis skywards. “The shaft of the ‘penis’ was definitely depicted as flaccid and drooping. When the very next day another set of cock and balls appeared in a neighbouring field, this time with the ‘penis’ definitely standing to attention, I knew for sure – alien sex therapists were trying to communicate their advanced techniques to the human race via the medium of cereal pictography!” According to Thrummock, the second ‘picture’ also showed what seemed to be a set of six elongated ‘fingers’ reaching toward the erection. The appearance of a second set of erotic circles in wheat fields just outside nearby Trowbridge seemed to confirm Thrummock’s thesis. “This time the first one depicted a pointed vertical line below a V-shape, with what appeared to be drops of liquid spurting from the point of the line,” he explains. “As before, the very next day another one appeared in a neighbouring field, this time showing the pointed line nestling within the V, shooting out droplets. Once again, those long ‘fingers’ were reaching toward the line in the second one!” Thrummock is convinced that the second set of crop circles represent premature ejaculation being cured by alien intervention. “The key lies with those fingers,” he muses. “I believe they are representative of the sexually healing powers of the aliens’ touch.” But are they ‘fingers’? Rival UFOlogists claim that the mysterious elongated lines seen in two of the erotic crop phenomena actually represent the aliens’ genitalia. “It’s obvious that these are the six penises of a sexually advanced extraterrestrial race,” declares Marnie Stickpegg, president of the Bradford-on-Avon Flying Saucer Society. “The message is clear – it is their outer space semen which, when ejaculated over the affected sexual organ, can cure the affliction.”

Unfortunately, the debate cannot be resolved by referring back to the original crop circles, as the fields containing them were harvested before any pictures could be taken. Nevertheless, a recent alien abduction would seem to support Thrummock’s interpretation of the mysterious symbols. “I was lying in bed one night when the room was suddenly filled with light and the walls began to shake – I ran out into the garden to see a huge spaceship hovering over my house,” claims eighty two year old Len Wigass. “Next thing I knew I was aboard it, still clad only in my pyjamas!” According to the Southampton pensioner, he was taken on a whistle-stop tour of the solar system by his alien hosts, who also kept him entertained in other ways. “I was stripped naked and made to lie on what looked like an operating table,” he recalls. “Then one of them reached between my legs and cupped my scrotum in one six-fingered hand, whilst his other grasped my penis. Although I was shocked, I couldn’t move, but I could feel this weird energy pulsating from his fingers into my genitals!” An astonished Wigass looked on as his testicles began to glow and his penis became erect, its head flashing with light. “It was huge, the biggest I’ve had for years – not only that but it stayed up, solid as a rock,” he says. “I could feel the sexual energy coursing through me, building to a crescendo!” Finally, with a huge groan, Wigass ejaculated spectacularly, a beam of purple light erupting from his penis. “It was incredible, but left me exhausted,” he says. “I just closed my eyes for a second, and when I opened them again, I was back in my own bed. When I looked at the clock, only a few minutes had gone by!” Wigass firmly believes that the aliens were on a mission of mercy, revealing that he had spent hours unsuccessfully trying to get an erection on the night of the abduction. “I was so frustrated, it had been years since I’d had a truly satisfying wank. I truly feared that I would go to my grave without ever staining the sheets again,” he says. “They must have telepathically picked up my emotional distress and came to help!” Several similar incidents involving alien proddings and gropings were reported in the Southampton area around the same time, most notably an Eastleigh woman who claimed to have been cured of her frigidity after a six-fingered groping. “Until they fumbled with my breasts in that back alley, I didn’t know what ecstasy was,” she later told a local newspaper. “Then, when the creature inserted one of its long glowing fingers into my black hole, my entire body was lit up from inside. I must have woken up half the street with my shriek of pleasure!”

Whilst such incidents appear to support Thrummock’s theories about the sexual healing properties of the aliens’ fingers, a series of sexually explicit pictures cut into corn fields outside Bradford on Avon, showing earthmen and women being simultaneously pleasured in every orifice by a single multi-penised alien, have given more credence to Stickpegg’s thesis. Sadly, Stickpegg has no documentary evidence of the pictures, claiming that the fields were burned by a mob of outraged moral campaigners wielding flaming torches before she could take any pictures. Nevertheless, the intrepid UFO investigator claims herself to have tried the ‘therapy’ demonstrated in the pictures, claiming that it has reinvigorated her flagging sex life. “Obviously, I didn’t have a multi-penised alien available, so I employed six young men from the local rugby club instead,” she explains. “I can tell you, it has certainly broadened my horizons.” Regardless of which organ the outer space sex therapists are using, the question being asked by many in the UFO world is: what do they want in return for their services? “I can’t believe that they are just doing this for purely altruistic reasons,” declares top flying saucer expert Jeffrey Ringhole. “Personally, I think they’re just after some inter-species sexual intercourse – the intergalactic equivalent to bestiality! Believe me, we should be very wary of them, they just want to use us and cast us aside once they’re bored!” However, Thrummock takes a different view. “All the abductees describe the aliens as having no proper mouths, just a thin lip of skin, and say they cannot ingest like us,” he points out. “I’m firmly of the belief that they haven’t been able to master oral sex and they want to exchange their advanced sexual therapy in return for us teaching them the joys of the blow job and cunnilingus.” Consequently, Thrummock is planning a ‘World Sexual Contact Day’, in which UFO enthusiasts and contactees across the globe will stand in fields waving their breasts or penises skyward in an attempt to attract the aliens – an event he claims he was practising for at the time of his arrest.