I Spit on Your War Grave 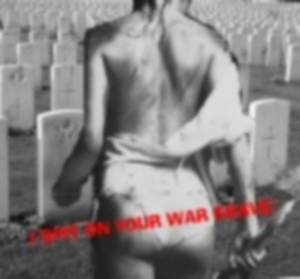 A popular British tabloid’s publication of photographs purportedly showing the entire shadow cabinet dressed in Nazi uniforms whilst attending bilateral talks with their new European allies, the National Purity Party of Latvia, has led to fears that a vicious circulation war could be dragging British politics further into the gutter. “How can we ever hope to restore the electorate’s faith in our elected representatives, when our gutter press are splashing pictures of leading opposition politicians dressed in Nazi uniforms across their front pages?” demands Parliamentary standards watchdog Lord Muffer. “If it emerges that they used their parliamentary expenses to pay for those uniforms, then there will be a public uproar! All those leather straps and jackboots don’t come cheap!” The newspaper in question, the Daily Norks, has defended the story as a legitimate and timely expose of the Conservative Party’s growing links with far-right political extremists in Europe. “The bastards are all there – Cameron, Osborne, Hague, even the bloody Mayor of London, that buffoon Boris Johnson – jackbooted and sporting swastika armbands, whilst they give the Hitler salute to a parade of local SS veterans,” says Bill Nardy, editor of the Daily Norks, which printed the pictures. “What further proof does the British electorate need that the Tories under Cameron are just a bunch of evil fascists? I mean, the fact that they’re consorting with neo-Nazis on a daily basis in Europe goes virtually unreported in this country’s Tory-controlled press – surely the electorate have a right to know what kind of company these so-called ‘caring conservatives’ keep?” According to Nardy, whilst in Latvia the top Tories attended a World War Two themed outdoor activity centre situated in a forest just outside Riga. “They got to re-enact the local pogroms and raze entire pro-communist villages to the ground with Tiger tanks,” he asserts. “There’s a whole mock concentration camp where they can conduct appalling Dr Mengele-style sexual experiments on prostitutes with shaved heads pretending to be Jewish prisoners. Apparently, if you’re prepared to pay a premium, they’ll even round up some local down and outs and drug addicts for you to gas!” Although critics have pointed out that the photos are obviously faked – Boris Johnson’s face has been crudely photo shopped onto a picture of Luftwaffe chief and fat buffoon Hermann Goering, for instance – sources in the Conservative Party have conceded that a meeting with the Latvian Purity Party did take place, but claim it was merely a ‘team-building’ session conducted at an outward bound centre near Riga. “It was all just a bit of fun – role-playing and so on. Those uniforms may have borne a superficial resemblance to Nazi outfits, but they were simply generic military fatigues – with shiny leather straps,” explained a spokesperson. “Not only that, but the swastika is widely used in Northern European cultures as fertility symbol. There’s nothing sinister at all about it.”

Nevertheless, Nardy remains unrepentant, standing by his story. “OK, so it’s a bit of an exaggeration, but at least there’s some truth in it – Cameron really is cosying up to the Euro Fascists – unlike the complete lies that those scumbags over at The Shite have been peddling about Gordon Brown,” he claims. “It’s bloody outrageous, whatever he does, they put some spin on it to make out he’s some kind of unpatriotic child murderer or something!” Indeed, since the Daily Norks‘ arch-rival declared it would no longer be supporting the Labour government, instead swinging its weight behind Cameron’s Tories, it has printed a series of stories seizing on even the most trivial gaffes to try and smear the Prime Minister. “Even when he’s being compassionate, sending hand-written letters of condolence to the families of servicemen killed in Afghanistan, they somehow manage to turn it around,” rages Nardy, referring to The Shite‘s recent feature, timed to coincide with Armistice Day, in which calligrapher cum Page Three girl Brandy Melons analysed the Premier’s handwriting in one such letter. “Those looping letter Ls are strongly indicative of an inner contempt for the concepts of heroism and self-sacrifice, which could easily express itself in a desire to urinate over war monuments,” opined twenty three year old Londoner Brandy, in the piece, entitled ‘I Spit on Your War Grave’, which was accompanied by a photo of her topless and wearing a tin helmet, whilst sitting astride a giant fountain pen. “Reading between the lines of his letter, it is obvious that he is really saying to this grieving mother that he really doesn’t give a toss about her son’s sacrifice, and instead wants to smear his own excrement all over the Cenotaph on Remembrance Sunday.” In another recent article the Tory tabloid used a medium to contact the spirits of various military heroes, including Viscount Montgomery and the Duke of Wellington, to comment on Brown’s conduct of the war in Afghanistan. “I find it very hard to believe that Lord Nelson would use the words ‘one-eyed whingeing tosser’ to describe anyone, let alone the Prime Minster,” sighs an exasperated Nardy.

The Shite has fiercely defended its coverage of the Prime Minister, denying that it has told any outright lies. “Look, we’re just tapping into the zeitgeist – our readers have been telling us for ages now that they think Brown is a useless tosser,” says its editor, Johnny Notch. “Consequently, we’re just interpreting the facts the way that reinforces their prejudices – doing anything else would be bloody stupid, wouldn’t it? I mean, we don’t want to risk losing readers by printing facts they might not agree with, do we?” It would seem that the Press Complaints Commission (PCC) agrees with Notch, having rejected complaints lodged by Nardy about The Shite’s reporting of the Prime Minister. “Frankly, we see nothing amiss with either of the stories Mr Nardy has cited in his complaint,” says the PCC’s chair, former Tory MP Lord Jostler. “The calligraphy story was clearly based upon legitimate scientific analysis, whilst the opinions expressed during the séance fall within the definition of ‘fair comment’. Just because people are dead, it doesn’t mean that they’re not entitled to express their opinions on the news.” By contrast, the PCC is currently considering a complaint against the Daily Norks’ recent story. “It’s quite clear that this so-called ‘journalism’ is seeking to completely misrepresent one of our major political parties by distorting the facts,” says Lord Jostler. “This kind of reprehensible lack of regard for normal journalistic standards needs to be nipped in the bud!” Adding insult to injury, whilst the Daily Norks‘ ‘Cameron Nazi’ story was intended as retaliation against it’s rival’s anti-government campaign, it seems to be in danger of backfiring. “We wouldn’t normally bother commenting on this sort of thing – I mean, it’s hardly news to our readers that they might be supporting fascists,” declares Notch, “but listen, those guys Cameron is apparently saluting in Latvia might have been ex-Nazis, but at least it shows that he knows to honour war veterans properly. Not like that bastard Brown – we all saw him mooning at our brave boys during the Remembrance Day parade! At least, I’m sure that we can find someone who can interpret his actions that way and, given enough time, we can also produce a dramatic reconstruction of the event!”