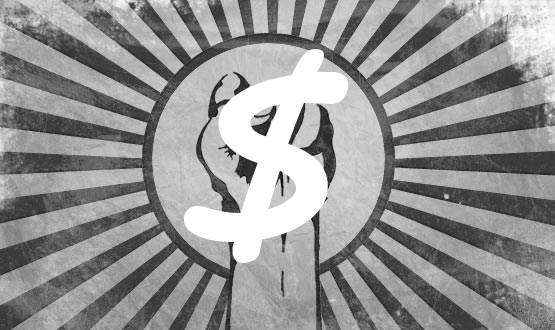 “It’s the only way to finance anything these days,” thirty two year old Hank Stangless told The Sleaze. “I mean, the banks aren’t lending and most people don’t have the spare cash to contribute thanks to the recession, yet if you look at crowd-funding sites like Kickstarter, you can find people prepared to invest millions in the most bizarre-sounding projects. So, I thought, what the Hell, why not go there to finance the revolution?” Stangless, a call centre operative and part-time post-graduate student, seems an unlikely revolutionary, sat in the kitchen of his West London flat, calmly discussing the dynamics of on line funding campaigns with us. Far from the Che Guevara stereotype of beret-clad, clenched fist saluting and gun-toting rebel, Stangless appears every inch the twenty-first century professional, which, he contends is the way modern revolutions must be conducted: professionally. “If we want to effect the armed overthrow of the government, then we have to approach it in a business-like way,” he explains. “We have to move with the times and, whether we on the radical left like it or not, in modern Britain there is simply no appetite for the old-school semi-organised revolution, with people running around firing guns and seizing post offices willy-nilly. They’re used to efficiency, lean organisational structures and financial prudence. So, we have to present them with a business case for the revolution – we have to show how every penny raised will be spent in gaining power and how we’ll be more efficient than the current regime when we are in control.”

Consequently, Stangless has set up his ‘UK Revolution’ project on Kickstarter, inviting investors to pledge funds for the other throw of the British state. “Obviously, a revolution in its entirety would cost hundreds of millions to finance – far too big a project for Kickstarter investors. So, we’re doing it in phases,” he explains. “In the initial phase we’re looking to raise only a few hundred thousand to get started with recruitment, propaganda campaigns and some basic stuff like plastic explosives and timers so that we can make a start on small-scale disruption,” According to Stangless, the campaign is going surprisingly well, with the target already seventy five per cent met with more than three weeks to go. “We’re confident of achieving our target,” he says. “We’ve been getting pledges from all sorts of people – not just the traditional extremist nutters who usually back revolutions – representing a good cross-section of the community.” He believes that the current disaffection felt my many people with regard to mainstream politics in the UK have helped boost the campaign. “The fact is that many, many people are tired of corrupt politicians and greedy bankers, but they realise that they can’t effect change through the ballot box,” Stangless explains. “However, these aren’t the sort of people who would usually support a revolution and the violent overthrow of the government, but when they see this project being funded through Kickstarter, they feel assured that this a properly organised and funded movement instead of the usual chaotic shambles run by bloodthirsty, power hungry maniacs. Moreover, by investing in it, they can feel a sense of ownership over this revolution.”

Once the first stage funding is secured, the project can move ahead. “Obviously, we’ve had to lay out our aims for potential investors: targets for recruitment, subversion of government institutions and bombing campaigns,” he says. “Once we show that we’re on course to achieve these, then we’ll go back to Kickstarter for the next phase of the revolution – heavier weapons, like Kalashnikovs, organising armed brigades, high profile armed operations against high value targets, that sort of thing.” He is still undecided as to the best way to finance the latter stages of any armed insurrection. “Should we try to raise enough to bulk buy the heavy equipment,” he muses. “Or should we go to Kickstarter to buy it tank-by-tank?” Stangless has dismissed objections that his revolutionary project has no place on Kickstarter, not being in the spirit of the start-up site which was originally intended to finance artistic endeavours. “What could be more creative than a revolution?” he asks. “After all, we’re seeking to create a new, fairer, society and political structure. It’s not as if we’re mere terrorists, seeking to create chaos in the pursuit of some obscure religious or political issue!” Indeed, at least one other, similar, project has already been thrown off of Kickstarter: a Jihadist terror group’s attempt to raise funds for a nuclear device. “It wasn’t clear whether they were going to build one, or try to buy one from a former Soviet state,” says Stangless. “Either way, it was an entirely destructive project and, unlike ours, had no place on Kickstarter.”

Stangless’ project has come in for criticism from other left-wing radicals, who suspect his motivations and argue that financing a revolution through crowd-funding will inevitably compromise its values. “Kickstarter is modern capitalism personified – making artistic endeavour a competitive activity dependent upon the patronage of the wealthy,” veteran activist Harry Embers has told The Sleaze. “It will do the same thing to any so-called revolution organised through it – it effectively giving ownership of it to the very people it should be destroying!” However, Embers, who has been involved in various revolutionary causes since the early seventies, including the Angry Brigade, isn’t surprised by this latest development. “It’s inevitable really – mainstream left-wing politics have already been bought out by the middle classes, who have thrown out radicalism and ideology and replaced it with nonsense about ‘social markets’ and the like,” he says. “It was only a matter of time before we saw the gentrification of revolutions as well – believe me, these so-called revolutionaries are interested in only one thing: the replacement of one bunch of middle class twats at the top for another.”

Not surprisingly, Stangless rejects entirely Embers’ criticisms. “He’s a dinosaur! It’s his generation’s refusal to move with the times which is behind the failure of every revolutionary movement in this country,” he told us. “They lack ambition, keeping everything secretive and small scale. That’s their biggest problem – they treat revolutions like they were hobbies, when, to be successful, you have to be professional and learn to see them as enterprises.” He sees nothing wrong in utilising capitalist mechanisms like Kickstarter to fund what is essentially an anti-capitalist endeavour. “You’ve got to turn the system against itself, use it to sow the seeds of its own destruction,” he enthuses. “Besides by allowing individuals to be stakeholders, isn’t this truly a ‘people’s revolution’?” Stangless also reiterated his original point that nowadays there were no realistic alternatives for financing a revolution. “Look, the days when you could go to the Soviet Union for tons of free weapons and ammunition for a leftist uprising are long gone. Even those post-Soviet days when you could buy whole brigades of tanks on the cheap from former Soviet states are over – they’re busy using them to fight each other now,” he points out. “Even the Chinese prefer to just buy the entire industrial bases of Western countries rather than finance revolutions in them – it’s quicker and cheaper. Believe me, crowd-funding is the only effective alternative.”